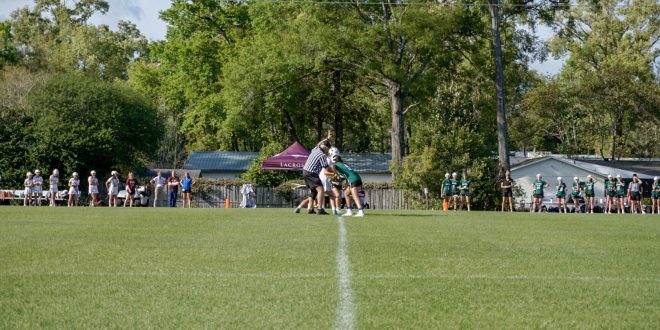 Covering Oak Hall girls lacrosse this afternoon as they take on Pine Crest at home. Game just got underway and both teams looking for the first score @ESPNGainesville @OakHallGirlsLax

The Oak Hall girl’s lacrosse team lost their second straight game, falling to Pine Crest 15-10 and bringing their season record to an even 3-3.

This match up featured two perennial lacrosse programs, with both teams having made it to the regional playoffs last year. However, the Panthers’ experience and ability to penetrate Oak Hall’s defense gave them the edge in this game.

Freshman Taylor McClain led Pine Crest with four goals, three of which came in the first half of play to give them a 7-2 lead at halftime.

Keeping up with the Cutters

Oak Hall’s main breakdown came on the defensive side. Possession was evenly split for the most part, but whenever Pine Crest had the ball in attacking territory they had open players running towards the goal, known as cutters. This gave them great shot opportunities, of which they usually made good on.

“We had a lot of mistakes on the defensive end. They weren’t marking up on the cutters and that was our biggest breakdown.” -Oak Hall coach Alex Puller

Pine Crest leads Oak Hall 7-2 at halftime. PC with a big swing, scoring two goals with less than a minute remaining in the first half. Taylor McClain and Sophia Lehrman have been difference makers for the Panthers with 3 goals each @ESPNGainesville pic.twitter.com/aoH4QkjVmn

Although the Eagles’ defensive struggles cost them in this game, they were able to make a late offensive surge on the Panther defense. With only two seniors on their team, Kaylyn Koons and Stephanie Miller, the offensive game plan moves primarily through them.

Late in the second half, Miller was able to move with the ball efficiently and find open cutters to set up good shot opportunities. Koons and junior Lauren Rogers each scored three goals, finding the back of the net towards the end of the game.

In the end, the burst was not enough, though, as the Panthers nailed down their seventh win of the season in a tough road test. The Eagles will face South Fork today at home for their next game and will play their next district game at Gainesville on March 19.

Final at Oak Hall: Pine Crest defeats the Eagles, 15-10 in a battle of perennial girls lax programs. The deciding factor was defense for the Eagles in this one, as they just couldn’t keep up with the Panthers. Oak Hall will look to rebound against South Fork tomorrow at 10 a.m. pic.twitter.com/YSq1JARiad

I'm a third-year student at the University of Florida passionate about storytelling and sportswriting. My goal is to work in communications for a professional sports team after I graduate.
Previous After Dramatic Win Over LSU, Gators Focus Shifts To Auburn
Next Buchholz defeats PK Yonge Softball In Close Game