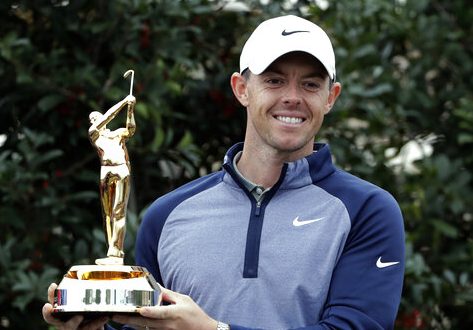 The 29-year old Rory McIlory may have just secured a spot for the Masters in April. McIlory finished with a 2-under 70 grabbing his first Players Championship title yesterday. He became the first PGA Tour player to win both the FedEx Cup and The Players Championship.

Jim Furyk had a very impressive performance at Sawgrass. Furyk had a shot in the 18th that allowed him to take the lead. His ball landing just three feet from the hole for a birdie to put him in first.

Although the 48-year old didn’t win on Sunday, he was pleased with his performance as just one week prior he didn’t even know that he was going to be playing.

McIlroy looked like he was going to be in trouble on the 14th with a tee shot that landed in the bunker. However, McIlory responded with a 15-foot shot for the birdie. Then, McIlroy birdied the par 5 16th to take the lead back.

Heading to the 18th, McIlory knew that he would likely only need par to win. He was able to finish with the par that he needed to secure his first tournament win since last March in the Arnold Palmer Invitational.

McIlroy finished at 16-under 272 to win The Players Championship.

McIlory says that getting his mind right was important in securing this win.

This is McIlory’s 15th win on the PGA Tour. It was his 23rd career worldwide. With this win, McIlory moved to the top of the FedEx Cup standings which will be helpful for him with the Masters less than a month away.

In six tournaments this year, McIlroy has not finished worse than sixth.

The Masters is the only major that McIlory is missing in order to get a career grand slam.

He will be competing in the Masters that will take place on Thursday, April 11 through Sunday, April 14, 2019.