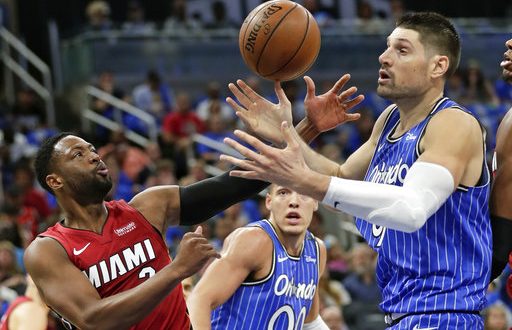 For instance, with the victory over the Hornets, the No.8 Heat are one game ahead of the No. 9 Magic and pushed it’s lead over the No.10 Hornets to two games in the Eastern Conference playoff push.

After shooting 32.6 percent from the field, the Heat (33-36) came alive in the fourth quarter.

However, the Heat played without Justice Winslow who missed the game due to a right thigh bruise as Miami entered the fourth quarter with just a one-point lead but outscored Charlotte 32-15 in the final period.

After that, Goran Dragic delivered 10 points and Dwayne Wade had 12 points in the quarter.

Lastly, Dragic finished off the night with 19 points on 7-of-11 shooting and four assists as Wade had 17 points on 6-of-14 shooting and eight rebounds as he played the match with a right hip bruise that put his status for the game up in the air before tip-off.

Next, the Heat hit the road as they now begin a four-game trip with a Monday matchup against the Thunder in Oklahoma City.

Nikola Vucevic recorded a game-high 27 points along with 20 rebounds as the Magic delivered a 101-91 win over the Hawks.

First, the win extends the Magic’s home win streak to four and has kept them in pace with the Miami Heat in the Eastern Conference playoff race.

Secondly, Vucevic scored 17 of his 27 points in the first eight minutes of the game as Aaron Gordon had 22 points and eight rebounds as well.

Further, Michael Carter-Williams who signed a 10-day contract with the Magic, played in the backup role as point guard and finished with five points and four rebounds.

Finally, the Magic play Wednesday against the New Orleans Pelicans as their home-stand continues.