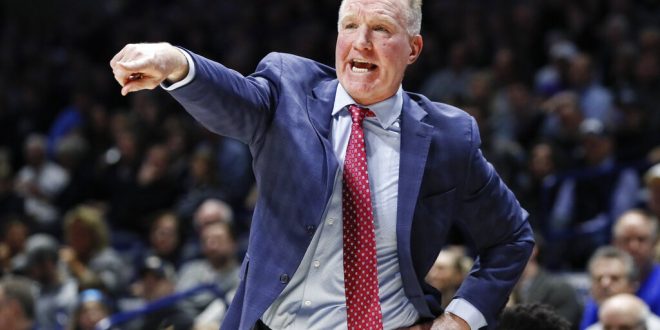 St. John's head coach Chris Mullin directs his players from the bench in the first half of an NCAA college basketball game against Xavier, Saturday, March 9, 2019, in Cincinnati. (AP Photo/John Minchillo)

Bobby Hurley and Chris Mullin faced off in a 1992 scrimmage as opponents. But this wasn’t just any scrimmage. Hurley was a member of a college all-star team that scrimmaged the Dream Team prior to the 1992 Olympics. He faced all-time greats like Michael Jordan, Larry Bird, and Mullin.

And now, nearly 30 years later, the two legends face off again – this time, as coaches. With Hurley coaching the Arizona State Sun Devils, and Mullin coaching the St. John’s Red Storm, the two face off in a critical play-in game.

The winner gets a spot in the big dance.

Mullin leads a team that has had several up and downs. While the Red Storm have captured big wins against top-25 teams like Marquette (twice), as well as Villanova, they’ve also suffered some tough losses to Seton Hall and Georgetown. They ended conference play at 8-10, with an overall record of 21-12.

Their offense averaged nearly 78 points a game. That offense is led by Shamorie Ponds – the junior from Brooklyn is putting up nearly 20 points a game.

But Mullin says he contributes much more than just on the offensive end.

His fellow teammates will need to step up big to keep the game competitive. Marvin Clarke II, a redshirt senior, averages over five rebounds a game and will need to keep that up tonight. He’s confident his team can make a run late into March.

This is the second consecutive season in which Hurley has brought the Sun Devils to the First Four. But this time, he brings a much more balanced team.

Arizona State (22-10, 12-6 Pac-12) ended second in their less-than-stellar conference, but they pulled off some huge nonconference wins against Kansas and Mississippi State. They’ve got four players averaging over 10 points per game, which gives their offense many options.

Remy Martin averages 13.4 a game, second best on the team. While the sophomore from California suffered a groin strain during the Pac-12 tournament, he says he’s ready to go for tonight.

Freshman Lugentz Dort is the team’s leading scorer, dropping over 16 points per game. He’s stepped up in big moments this season – he scored 13 in the team’s win over KU. He’ll need to have another big night on the bigger stage.

Hurley says his team is playing with high energy. That’s important in March.

Tonight’s winner gets to play in the NCAA tournament’s round of 64, arguably the most exciting time in sports. Whoever wins will face No. 6 seed Buffalo. You can catch all the action tonight starting at 9:10.