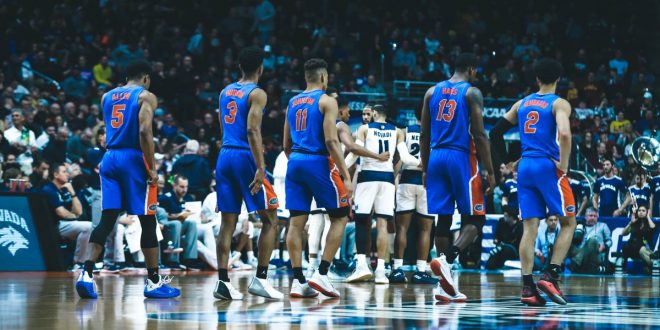 Kevarrius Hayes and Jalen Hudson did not want their college careers to end in the first round of the NCAA Tournament. Both seniors led the Gators to a 70-61 victory over the Nevada Wolf Pack.

Hayes, who claimed before the tournament started that this team is special enough to make another Elite Eight run, put up a team-high 16 points on 5-6 shooting. The senior missed a majority of the second half with foul trouble.

Cody Martin torched the Gators for 23 points on 8-12 shooting. His brother, Caleb, chipped in 19 points and 8 rebounds.

The Gators looked primed to run away with the game as they were up by 18 points with 14:03 left in regulation. However, Nevada had other ideas. They proceeded to go on a 22-7 run to cut the deficit to three points with 5:18 remaining.

Nevada is known for their major comebacks. In the first round of the NCAA Tournament last year, they were down to Cincinnati by 22 points before pulling off a historic comeback.

However, the Gators ultimately rebounded from this rough stretch by outscoring the Wolf Pack 12-6 over the final 5 minutes of action.

Sticking to the Game Plan

Mike White specifically mentioned four key points to the game in his introductory press conference on Wednesday afternoon. They were to excel in defensive transition, come up with live ball turnovers, balance the floor and lock down on isolation defense. The Gators accomplished all four points in their first round victory.

They forced 14 Wolf Pack turnovers and capitalized with 16 points. Florida also held Nevada, a team that loves to push the ball in transition, to two fast break points. Nevada was limited to 24 points in the paint. This was impressive for a Gator team that is undersized and was without their starting center for a large portion of the second half.

Even though Caleb Martin had 19 points, the Gators were able to limit him to 5-22 from the field, including 2-11 from three. Jordan Caroline also really struggled with only 7 points on 2-11 shooting. The Wolf Pack shot an abysmal 19-55 (34.5%) from the field, including 5-24 (20.8%) from beyond the arc. They also had only 4 assists, which was a result of the Gators forcing Nevada into isolation basketball and contested shots.

The Gators have advanced to at least the second round of the NCAA Tournament for the third straight year. Mike White’s record in NCAA Tournament is 5-2, including an Elite Eight run in his second year.

White praised the seniors for completely turning around the fortunes of the season.

“Our seniors have taken good ownership especially late in the season led by Kevarrius and Jalen.”

This senior leadership will continue to be crucial as the Gators hope to keep advancing in the tournament.

They will face the winner of No. 2 Michigan and No. 15 Montana on Saturday in Des Moines, Iowa. Other information, including start time and network production, need to be determined. The game can be heard live on ESPN 98.1 FM & 850 AM WRUF.