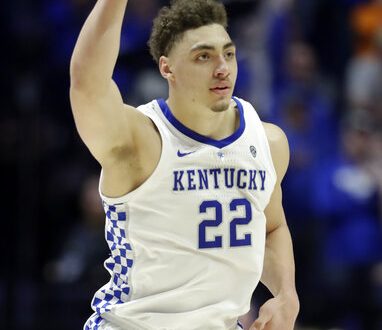 Kentucky forward Reid Travis celebrates after scoring a 3-point basket against Tennessee in the first half of an NCAA college basketball game at the Southeastern Conference tournament Saturday, March 16, 2019, in Nashville, Tenn. (AP Photo/Mark Humphrey)

Coming off a devastating loss to the Tennessee Volunteers last weekend in the SEC T0urnament Semi-Finals, the Kentucky Wildcats look to redeem themselves as they start their NCAA Tournament Campaign against the Abilene Christian Wildcats.

This will be the 58th time the No. 2 seed Wildcats will be making their appearance in the tournament and will be hoping to raise their ninth banner. Even with PJ Washington sitting out Thursday night, the Kentucky Wildcats will still look to utilize their size advantage the way they have been all season.

“The specialists confirmed our original diagnosis that PJ Washington has a sprained foot and there is no fracture,” said head coach John Calipari. “Once we determined that PJ was not going to play today, they put him in a hard cast for precautionary reasons. He is out for today’s game.”

Washington averaged 14.8 points and 7.5 rebounds this year and was chosen as first team all SEC. As of now, he is being considered a first-round choice in the NBA Draft should he leave school early.

Other key players for Kentucky feature Guards Tyler Herro and Keldon Johnson. Both Herro and Johnson shined during the SEC Tournament and throughout the season both averaging around 14 points and should be poised to continue the trend as they open up the tournament.

This is Kentucky’s seventh time as a No. 2 seed. Overall, they have won 24 of its last 25 NCAA openers, holding a 47-10 all-time mark in its first outings of an NCAA Tournament.

“Everybody’s playing for their life and survival,” Calipari said. “We have to get through Abilene Christian. That’s all I’m worried about right now.”

Abilene Christian has been a Division I team since the 2013-14 season, and this is their second season of eligibility for the big dance. With winning the Southland Conference Tournament and going 27-6 in the season (tying a program record for wins in a single season) one can say the rise has been fast for the Wildcats.

“I’m sure they have no idea where Abilene, Texas, is. I’m also sure they’re not worried about little old Abilene Christian,” said head coach Joe Golding. “But we’re going to use this opportunity to give the nation a window into this great university and this team and these players, and we’ll get out on the floor and compete hard for 40 minutes and see what happens.”

Led by forward Jaren Lewis, Abilene Christian is a team that can spread the court and find the open man. They shot 38.8 percent from the 3-point line, ranking 18th in the Country.

Going into this matchup it is seen as pretty uneven. Kentucky is sitting at being ranked No. 11 on offense and No. 12 at defense while Abilene is at 186 on offense and 122 in defense. But one area where ACU could give Kentucky problems is forcing turnovers.

The Wildcats from Texas force opponents into turnovers 20.8 percent of all plays, which is No. 4 nationally. They also hold opponents to an assist-turnover ratio of 0.700. Another thing to always consider in matchups like these is that anything can happen in March.