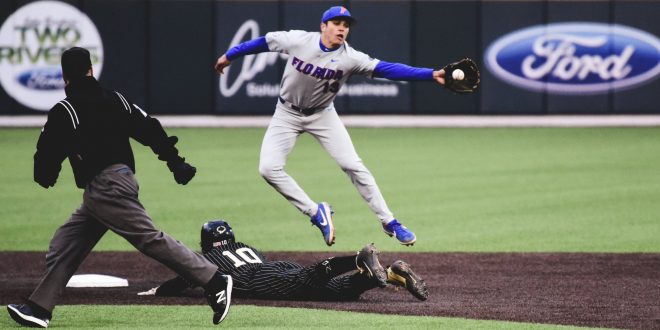 The Florida baseball team saw its SEC record fall to 1-3 after losing to sixth ranked Vanderbilt 5-0 on Thursday night in Nashville.  Last year, the Gators swept the Commodores in Gainesville.

The Gators were shut out for the first time this season as Vanderbilt scored a run in the first inning on an RBI double from JJ Bleday before Gator starting pitcher Tommy Mace got back in his groove for the next few innings.

Mace strikes out the side in the second to keep the score at 1-0.#Gators have a pair of hits thus far (singles from McConnell and Acton) but nothing across.

In the fourth, Vanderbilt’s would push across a run to take a 2-0 lead.

Mace pitched well for Florida, racking up a career high nine strikeouts but he ran into trouble in the seventh inning.   Gator coach Kevin O’Sullivan spoke after the game on Mace’s performance.

“I thought Tommy was outstanding tonight,” O’Sullivan said. “He made some great pitches and did everything he possibly could to keep us in the ballgame.”

With two on in the seventh, the Gators went to the bullpen and brought in lefty Jordan Butler to face lefthanded hitter JJ Bleday.  However, Butler walked Bleday, then hit a batter, and uncorked a wild pitch, allowing two more runs to score.  Righty Ben Specht relieved Butler and hit a batter that scored the final run of the inning.

Butler walks a batter, hits a batter and then throws a wild pitch and Vandy adds two more runs.

Now Specht hits a batter and another run comes in. Then a flyout ends the inning.

Vanderbilt starter Drake Fellows pitched a complete game five hit shutout while striking out eight Gator hitters; it was the first ever complete game for the Vandy junior starter.

Florida plays the second game of the series Friday at 7:30 p.m. Both games will be broadcast on Gators Sports Network and SEC Network+.

“We’ve got to go back to the drawing board and get going tomorrow (Friday),” O’Sullivan said. “Obviously we’ve got to do a little better job offensively.”

The series finale is set for Saturday at 2 p.m., as Florida will send Tyler Dyson (3-0, 3.42 ERA) to the mound while Vandy’s starter is yet to be determined.