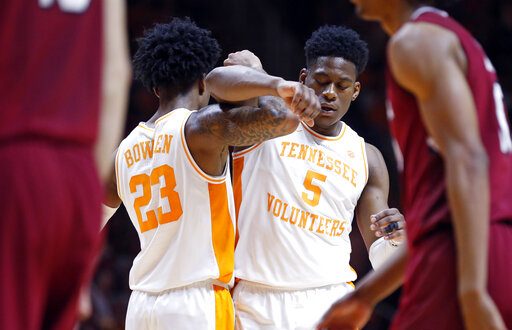 Three action-packed weeks of postseason college basketball is upon us. It’s March, and the NCAA Tournament’s first and second rounds start this Thursday and Friday.

The South Region of the bracket houses a few intriguing matchups including Wisconsin vs. Oregon, Ole Miss vs. Oklahoma and Iowa vs. Cincinnati. One game that’s flying under the radar though is the contest between 2nd seed Tennessee and 15th seed Colgate.

The Southeastern Conference’s Tennessee Volunteers (29-5) enter this year’s NCAA Tournament with something to prove. Last season, a Tennessee team that many people considered to be a sleeper final four team were upset by last season’s tournament darlings, Sister Jean and the Loyola-Chicago Ramblers in the round of 32.

The Tennessee Vols have arrived in Columbus, Ohio with high expectations on their Road to the Final Four. Thoughts from Grant Williams, Admiral Schofield, Jordan Bone and Lamonte Turner before Vols Friday opener vs. Colgate. pic.twitter.com/SdF2PTtXHp

The Volunteers returned most of that same roster, including Grant Williams and Admiral Schofield, arguably the country’s best one-two punch. This season, the two have combined to average 33.2 points per game and 13.7 rebounds a game. The tandem brings a swagger to the game every time they step on the court, and that confidence is a big factor in the team’s success this season.

The Vols have shown the ability to hang with anybody, and the experience that the team has makes them a trendy pick to make the Final Four for many wannabe bracketologists.

They’ve been battle-tested this season, nabbing wins over Gonzaga and Kentucky, narrowly losing to Kansas in overtime on a neutral court. Colgate should be the least of the team’s worries, however, if they overlook them, a first-round exit may be in the cards.

In a rare moment of transparency, Colgate head coach Matt Langel revealed the Raiders' extensive gameplan for shutting down the Tennessee #Vols pic.twitter.com/ACqLdqNrs6

The Colgate Raiders (24-10) of the Patriot League come into Friday’s game riding a ton of momentum. As a team, the Raiders have won 11 games in a row. They took home the conference tournament championship over the Bucknell Bison 94-80, clinching its first trip to the NCAA Tournament since 1996.

Over the series history between two and 15 seeds, the two seeds lead the all-time series 8-128. The last one came in 2016 when Middle Tennessee State shocked the Michigan State Spartans 90-81.

Colgate may be riding high, but look for the Volunteers to advance to the round of 32 with a victory.

The South Carolina Gamecocks head to Knoxville for a noon game against the Tennessee Volunteers. …