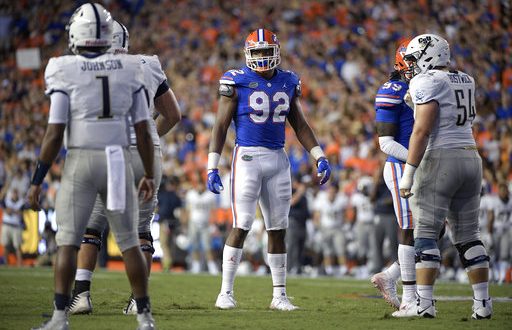 The Florida Gators football team has begun its spring practices to prepare for the upcoming season.

Florida defensive coordinator Todd Grantham has taken this opportunity to experiment with some of the younger players in different positions.

“It’s just about trying to get guys reps at spots they could be in relative to situations that come up,” said Grantham.

Some of the players Grantham has moved around include redshirt freshman David Reese, redshirt sophomore Zachary Carter, and sophomore Amari Burney.

Grantham has, so far, been using the redshirt freshman as an outside linebacker. Although he has things to improve, he’s shown signs of speed and power on the outside.

Carter’s combination of size and athletic ability allows him to play in multiple positions in the defensive line.

Grantham uses Carter as both a defensive end as well as a defensive tackle. Grantham likes to put bigger guys in the end position, because it allows for more athletic players to play inside.

This puts these more athletic players in a position to beat guards in one-on-one situations. For example, Grantham deployed this tactic with Jabari Zuniga last season.

Although naturally a middle linebacker, Burney made the move to linebacker toward the end of last season against Florida State and Michigan.

Grantham has several reasons for the move. Firstly, moving Burney further forward allows for the Gators to field more players with speed. Secondly, Grantham can fit more talent into the defense at any given time. Lastly, it gives the defense more flexibility, as Burney can easily transition back to middle linebacker when needed.

The Florida Gator football team’s annual Orange & Blue Game will take place on Saturday, April 13 at 1 p.m. Be sure to tune in to see Grantham’s adjustments in action.