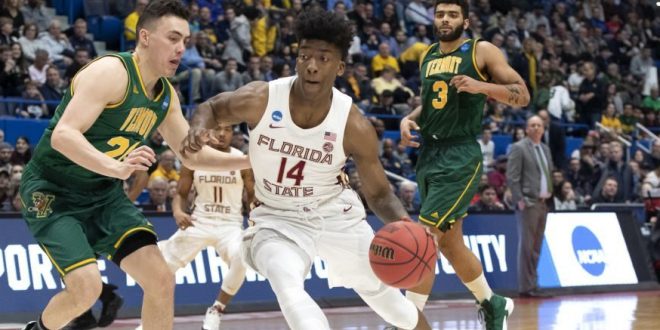 FSU Basketball Out-shoots Vermont, Advances to Round 2 of NCAA Tournament

No. 4 seed FSU outlasted a potential upset to the No. 13 seed UVM 76-69 during the first round of the 2019 NCAA Tournament. The opening round of the Western Region saw both teams swap the lead back and forth, with the Seminoles 17:56 to the Catamounts 15:36.

Florida State held off a late-game run from Vermont to advance and left bettors across the nation on edge. The Catamounts launched a last-ditch effort to close the 13-point lead held by FSU. Fouling seemed out of the question for Vermont and FSU decided to simply let the clock run instead of trying for a layup or dunk.

The Seminoles bench brought FSU 30 points while UVM’s reserves were kept to just 7. Vermont dominated the game with their shot percentage. The Catamounts shot 16/32 (50%) behind the arch and outshot the Seminoles 23/53 (43%) in field goals.

FINAL | Florida State pulls away in the second half to knock off the #NCAAVCats in Hartford pic.twitter.com/XVgWbRq1AW

Anthony Lamb was able to keep Vermont around, leading the team’s four double figures by 16 points with the other three having 15 points each.

Florida State owned most of the first half, but with a little over 12 minutes left, Vermont sprung forward to take over the lead by 9 points.

Ernie Duncan was one of the game’s stars shooters aside his two brothers, putting up 15 points and contributing to the season-high 16 three-pointers.

First time three Brothers are in a game simultaneously. RT @CBSSports: Three brothers combining for a bucket in the NCAA Tournament? That’s awesome.

Despite the raining of buckets from UVM, it wasn’t enough to stop the depth and size of FSU. The Seminoles trailed for most of the first half and rallied to enter halftime tied up. FSU was no doubt prepared to take on Vermont from beyond the arch, but beating a team that had 21 of their 27 first-half points from the perimeter is definitely a feat.

Senior Terance Mann scored 19 points and secured 8 rebounds during the game. He made huge plays in the late game with 17 of his points coming in the second half.

Mfiondu Kabengele stole the show for Florida State, not being afraid to charge the paint for some powerful dunks.

You think Mfiondu Kabengele is fired up? pic.twitter.com/AsL8ADW2Od

Late in the second half with just under four minutes came a symbolic dunk from a boxed-in Kabengele that solidified FSU’s desire to advance in the tournament.

With this victory secured, Florida State will face off against Murray State on Saturday afternoon at 6:10.