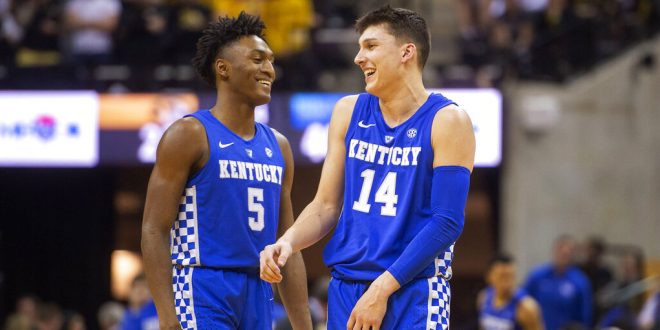 Kentucky's Immanuel Quickley, left, laughs with teammate Tyler Herro during the first half of an NCAA college basketball game against Missouri on Tuesday, Feb. 19, 2019, in Columbia, Mo. (AP Photo/L.G. Patterson)

Kentucky Demolished Abilene Christian in First Round of Tournament Action

Winning the Southland conference title was Abilene’s ticket-to-ride to clinch a spot in the men’s basketball NCAA Championship, but a first-round matchup against Kentucky would see their successful run come to an end.

A Battle Between Wildcats:

In a match-up between wildcats, we knew exactly which one of the two was wildest even before tip-off. The mighty Abilene Wildcats never stood a chance against the experienced Kentucky Wildcats.

Winning the tip-off and gaining first possession was a great start for Abilene, but after that, there was nothing else to be excited for other than their short participation in March Madness. Things went downhill quickly after failing to score in that first possession.

Kentucky’s freshman Tyler Herro opened the scoring with a simple lay-up. John Calipari’s men quickly noticed how weak Abilene’s defense was especially on the paint. Kentucky kept driving in and even if their first attempt at the basket failed, Reid Travis and EJ Montgomery snatched offensive rebounds and scored. A first Abilene time-out was called by coach Joe Golding after his team conceded two similar lay-ups without scoring a single point.

Things did change after that first time-out. ACU’s Hayden Farquhar opened their scoring with a fantastic three-pointer over three minutes into the game. Nevertheless, this didn’t stop Kentucky from continuously driving in and dismembering the Abilene’s defense.

The first half was a field day for Travis, Montgomery, and Herro as there was no one in purple and white that could contain them. The half ended 13-39.

Abilene had a better performance in the final 20 minutes of the game as it grew more contested. Abilene’s defense improved, giving the team momentum to go forward and score more. Forward Jaren Lewis took charge with the assistance of Jaylen Franklin and Payten Ricks.

Despite Abeline’s efforts to get back into the game, the thought of them coming back was farfetched. Kentucky’s Keldon Johnson became ACU’s worst nightmare. Johnson made it rain from downtown, scoring 3-for-5 from the three-point line.

Kentucky plays the Wofford Terriers who defeated Seton Hall in their first-round game. The game will be played on Saturday at 2:40 p.m.

Figuring out a plan to make it big in the soccer scene in the U.S. or anywhere else in the world. For now, I'm having a blast writing for ESPN Gainesville and learning a lot from managers and students around the workplace. I'm covering the TV beat for Gators Soccer. What a team! Follow me on twitter: @J_AguerrevereUF
@@J_AguerrevereUF
Previous FSU Basketball Out-shoots Vermont, Advances to Round 2 of NCAA Tournament
Next Florida Lacrosse Road Match-up with Stony Brook