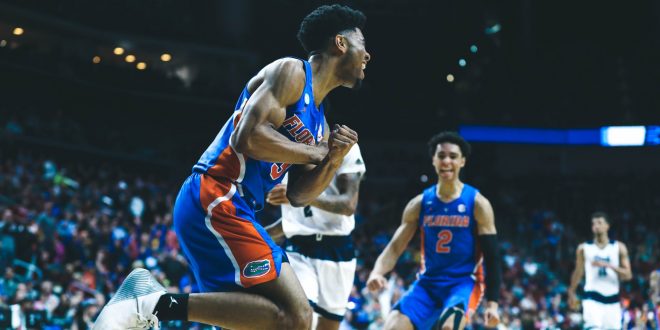 Gators Battle No. 2 Michigan in Round of 32

After defeating the Nevada Wolf Pack on Thursday, the Gators face a quick turnaround as they prepare to take on the Michigan Wolverines on Saturday.

Michigan took down Montana with relative ease on Thursday night by beating the Grizzlies 74-55.

#Gators are one game away from their second Sweet Sixteen appearance in three years. We spoke with the team today and asked the guys how they're feeling heading into tomorrow's matchup. pic.twitter.com/6Cy2Bh4Ocy

The Wolverines have been a dominant force in college basketball all season long.

If Michigan hadn’t run into Michigan State three times this season, a team they went 0-3 against, they would have easily been a No. 1 seed in the tournament.

The Wolverines rank 2nd in the country in defensive efficiency and do a fantastic job of contesting every shot attempt. They limit their opponents to 28.7% from beyond the arc, which is the 5th best mark in the nation. Michigan is also great at protecting the paint. This dominant interior defense is anchored by 7’1″ center, Jon Teske. Teske averages 2.1 blocks per game, which is the best mark in the Big Ten.

Starting point guard Zavier Simpson is the glue that holds the team together. The junior is averaging 9.1 points, 5.o rebounds, 6.7 assists and 1.4 steals per game. He provides significant contributions on both sides of the ball and has stepped up his play in the second half of the season.

“Their level of communication on the court, especially defensively. Their attention to detail. Their discipline. Their skill level. The fact that they all pass, dribble and shoot it.”

There is a great challenge ahead of us tomorrow.

The Gators’ offense has improved significantly over the past month. Much of this can be attributed to slowing down the pace and moving the ball to find the best available shot. This style compliments point guard Andrew Nembhard perfectly.

The Canadian plays at a slow, comfortable pace and never seems to get rattled if the tempo increases. This change of pace, along with the resurgence of Jalen Hudson and the improved play of Kevarrius Hayes, has allowed the Gators to get hot at the perfect time.

Their defense has been dominant all season. The Gators rank 15th in defensive efficiency and force turnovers on 22.6% of their defensive possessions.

Their defensive versatility and ability to throw out numerous defensive looks is what makes the Gators so difficult to attack.

Previous Alabama and Vanderbilt in Search of New Men’s Basketball Coaches
Next Gator Baseball Drops Series to No. 6 Vanderbilt