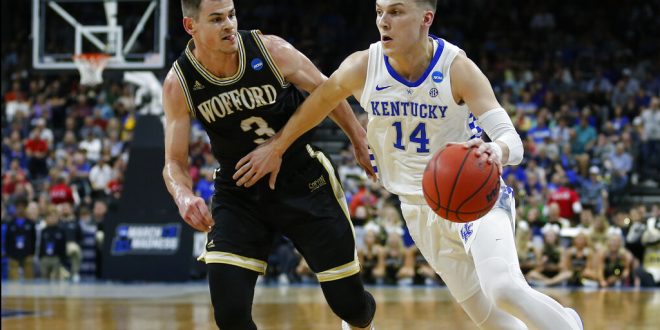 Kentucky's Tyler Herro (14) drives around Wofford's Fletcher Magee (3) during the second half of a second-round game in the NCAA men’s college basketball tournament in Jacksonville, Fla., Saturday, March 23, 2019. (AP Photo/Stephen B. Morton)

Kentucky Moves On To Sweet Sixteen After Close Win over Wofford

The Kentucky Wildcats are back in familiar territory.

For the eighth time in 10 seasons under head coach John Calipari, Kentucky is headed to the Sweet 16. The Wildcats booked their spot following a close win over Wofford, 62-56 in the Round of 32.

As the two seed in the Midwest region, Kentucky expected to make it to this point, but Wofford gave them everything they could handle.

The Terriers kept it close despite an off-day from senior guard Fletcher McGee. Just one game after McGee set the all-time NCAA Division I record for three-pointers made in a career, the senior went 0-for-12 from behind the arc against the Wildcats. He ended the game with just 8 points on 4-of-17 shooting from the field.

Instead, Wofford relied on a stingy defense and a big day from Nathan Hoover. The Terriers held Kentucky to just 28 points in the first half, and Hoover led all scorers with 19 points, including 4-for-5 from three-point range.

In the end, it didn’t matter. Even with no P.J. Washington, the Wildcats did what they needed to advance. Reid Travis was everything Kentucky needed, posting a 14-point, 11-rebound double-double. Freshman guard Ashton Hagans provided scoring help as well with 12 points, the only other Wildcat to score in double figures.

While not spectacular on offense, Calipari’s squad locked in defensively. They forced seven steals in the game, and outrebounded Wofford 36-30, including pulling down 11 offensive rebounds.

As evidenced by McGee’s off night shooting, Kentucky continuously forced difficult and contested shots. Wofford shot just 8-for-27 from beyond the arc, and shot just 37.5% from the field. Kentucky did all of this without really fouling either, as the Wildcats took 20 free throws as opposed to the Terriers’ nine foul shots.

Catfight in the Sweet 16

Up next for Kentucky, it’s a battle of cats, as the Wildcats take on the third seed Houston Cougars. Houston entered the tournament having lost the AAC tournament final to Cincy but bounced back big in the first two games of March Madness.

Tip-off from Kansas City is set for 9:59 p.m. on Thursday. The winner will play the winner of North Carolina-Auburn for a spot in the Final Four.