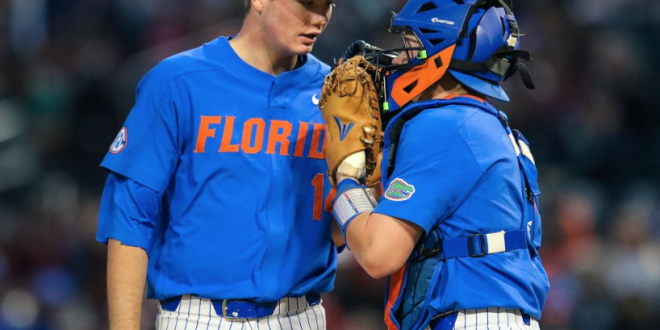 Gator Baseball Comes From Behind to Beat FSU 4-2

A wild, error filled, seventh inning ended up giving No. 24 Florida’s baseball team its 10th consecutive win over No. 21 Florida State (17-7; 5-4 in ACC) by a score of 4-2 in a game played at the Baseball Grounds of Jacksonville.

Junior outfielder Austin Langworthy doubled to down the left field line to drive home freshman Jud Fabian who had reached on one of three of Florida State’s fielding errors on the night. That lead however,then vanished in the bottom half of the next frame.

Sophomore RF Reese Albert singled in the following at bat, and Kevin O’Sullivan decided to lift his starting pitcher in favor of sophomore Jordan Butler. The Gator’s bullpen did its job in relief, while the Seminoles’ relievers faltered in the aforementioned seventh inning.

O’Sullivan’s team called upon the magic of an old in-state winning streak to give them a big midweek victory away from home.

Down 2-1 in the top of the seventh, Florida was on the brink of equaling their largest losing streak since May of 2018. However, the Gators would rally.   Jud Fabian drew a lead off walk but Austin Langworthy then struck out.  Catcher Brady Smith hit a ground ball that junior third baseman Drew Mendoza couldn’t corral and the error put two runners on board.

Jacob Young hit a slow roller to second base that Salvatore fielded but he tried to flip the ball out of his glove to first base and the ball got away as Fabian scored to tie the game and Young reached first base on the single and an error.  He and Smith both advanced into scoring position on the play and Gator shortstop Brady McConnell followed with a two run double to plate both runners.

In essence, Florida State’s poor defense helped their cross-state rivals out of a massive mid-season hole. Actually, Florida also committed two errors on the night but Gator coach Kevin O’Sullivan’s team still deserves plenty of credit for demonstrating the composure to deliver the timely hits that earned them the victory.

What the rest means

This game might’ve only been decided within the confines of the middle innings, but there was still plenty of noteworthy performances in other frames.

Crisp didn’t earn the win but he was still effective as the Gator starter as he tossed five innings, giving up two runs on three hits; at one point he retired 14 hitters in a row during the game.  He left the game having thrown only 63 pitches and 40 of those for strikes.

Questions of Crisp receiving a “quick hook” will also be silenced by the performances of the Florida’s relievers. Lefty Jordan Butler maneuvered around a single to ensure that Crisp wouldn’t be tagged for any more runs. And with Crisp now a starter, freshman Christian Scott seized an opportunity to close the game and he did just that.  He delivered 3.1 innings of shutout relief to earn the win and run his record to 2-1 on the season.

As for Florida’s bats, they produced quality at bats in key moments. Young, specifically, continues to be a presence in quite a few of the Gators’ offensive rallies over the past few weeks. Still, on Tuesday they were held to only six hits but also drew three walks.

That, to go along with their in-state rivals’ poor defensive play, handed the Gators their only win in their last four games, a stretch in which O’Sullivan’s offense has only managed 2.5 runs per contest.

Florida will now try to improve its 1-5 SEC record at home against Alabama (20-6; 2-4 in SEC) on Friday. Florida State will also be playing a three-game home series starting Friday against Boston College.

Sports media and management student at the University of Florida. Content creator for ESPN 98.1 FM/ 850 AM WRUF.
@TheEdgarChavero
Previous Tennessee Continues Dancing their way into the Sweet 16
Next Alissa Humphrey Dominates in Gainesville 10-0 Softball Victory Over Vanguard