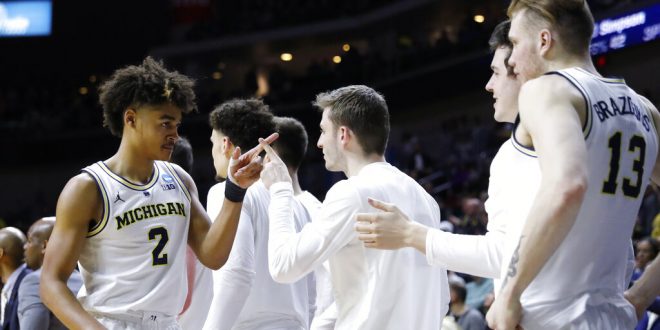 The Sweet Sixteen Begins Tonight: No. 2 Michigan Against No. 3 Texas Tech

In 2018, the Michigan Wolverines run to the Final Four ended with a sour taste in their mouths. Losing to Villanova in the tournament final by a 17-point margin was enough motivation for head coach John Beilein and the Wolverines to make a huge comeback heading into this year’s tournament.

The same mentality goes for Texas Tech. Head coach Chris Beard and the Red Raiders were also eliminated by Villanova in the Elite Eight by a 12-point margin.

However, this year only one of these two can repeat their Elite Eight run.

Oddsmakers set the line with Michigan between a 1.5-point or 2-point favorite over Texas Tech, making this game one of the tightest projected Sweet 16 games.

Freshman forward Ignas Brazdeikis, sophomore guard Jordan Poole, junior center Jon Teske, and junior guard Zavier Simpson are the most important assets to this Wolverines squad. They’ve all played and started in all 36 games this year.

The Canadian-international is the leading scorer with 15 points per game with his 6’7 build. The freshman is second in three-pointers made with 56 on the year. That makes him a reliable stretch-four on the Wolverines squad.

His strong drives to the basket also place him on the charity stripe quite often. He leads the team in trips to the free-throw line with 147 attempts and 116 makes for a 77% success rate. That’s 31 more attempts than their second-most free-throw attempt shooter Jordan Poole.

However, Brazdeikis suffered his fourth-lowest scoring outing in their win against Florida this past weekend with five points.

Wisconsin native pure-shooter is second in total minutes on the floor. He’s entered this year with a chip on his shoulder. Poole went from not starting a single game last season to being in the starting five for every game and averaging 33 minutes per contest this season.

The sophomore is knocking down an efficient 44% from the field and averages 13 points per game. He’s also shot the most attempts from beyond the arc with 200, converting 75 of them.

Poole went off in Michigan’s win against Florida when he finished with a game-high 19 points.

The seven-footer from Ohio has made his presence felt in every game this season. The junior big man averages a team-leading seven rebounds per game with his 7’2 wingspan. Teske took over the starting rotation after Moritz Wagner departed for the NBA last season.

His rebounding numbers finished in the double digits in 11 out of 36 games this year. His highest being 12 rebounds twice against Chattanooga and Wisconsin.

Teske averages 9.6 ppg and scored eight points and grabbed 10 rebounds in the win against Florida.

Zavier Simpson is arguably one of the most crucial passers in the tournament. He ranks 9th overall in assists per game with 6.8 and leads the team with 243 assists. To put it into perspective, the second leading assist leader for the Wolverines has 77 assists.

The junior from Ohio leads the team in minutes and is crucial on the boards, especially as a guard.

Simpson ended just shy of a triple-double against Florida. 9 points, 9 assists, and 9 rebounds.

As mentioned before, the Lubbock representatives are familiar with this scenario in the NCAA tournament. They defeated Purdue in the Sweet Sixteen just a year ago and have deep experience on their team.

Three players’ scoring averages in double figures with Matt Mooney and Davide Moretti. However, Jarrett Culver is the standout potential NBA prospect for the Red Raiders. All three of them are the only players who’ve tallied 1000+ minutes.

The hometown-hero has had a phenomenal year. The 6’6 forward is averaging a team-leading 18.8 points per game. He’s easily the top priority for every opponent’s defensive tactics.

He’s always on the floor, leading in minutes with 32 a game due to his 100% effort day in and day out. The sophomore guard absolutely dominates beneath the rim with 184 trips to the free throw line when driving towards the rim and has a 70% free throw success rate.

Other than scoring, Culver leads the Red Raiders in assists and rebounding. He currently has 129 assists and averages 6.6 boards per game.

Culver ended with 16 points and 10 rebounds in their Round of 32 victory against Buffalo.

6’3 point guard from Illinois has averaged 10.3 points per game. The Redshirt senior is second on the team with 115 assists and has started all 34 games this season.

He’s been consistent all throughout the year with his free throw percentage. He’s made 62 out of 81 attempts.

He scored 11 points and 4 rebounds last time out.

Tip-off is at 9:39 PM tonight in Anaheim, California at the Honda Center.

Recent grad from the University of Florida. Editing all articles on here while helping out the newbies. Love all things basketball.
@@MarcoJMartinez_
Previous Phillies host Braves on Opening Day
Next Gators set to host Pepsi Florida Relays