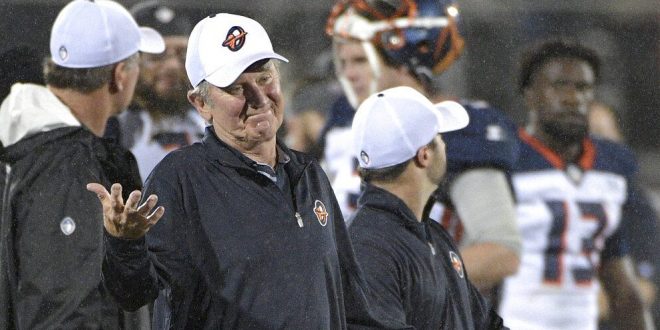 FILE - In this Feb. 9, 2019, file photo, Orlando Apollos coach Steve Spurrier reacts after a play during the second half of the team's Alliance of American Football game against the Atlanta Legends, in Orlando, Fla. The Alliance of American Football is suspending operations eight games into its first season. A person with knowledge of the decision tells The Associated Press the eight-team spring football league is not folding, but games will not be played this weekend. The decision was made by majority owner Tom Dundon. The person spoke to The Associated Press on condition of anonymity because league officials were still working through details of the suspension. An announcement from the league is expected later Tuesday, April 2, 2019.(AP Photo/Phelan M. Ebenhack, File)

First reported by Pro Football Talk and Darren Rovell, the future of the Alliance of American Football League is in doubt after reports surfaced about the possibility of the league folding for good or being temporarily suspended.

According to CBSSports.com,, the AAF has suspended all operations effective immediately. This suspension is indefinite as it is still unsure whether the actions will become permanent.

CBSSports.com reports that AAF controlling owner Tom Dundon is upset that the NFL won’t allow its practice squad players to play in the new league. Dundon recently made a pledge of $250 million to keep the league afloat.

Alliance of American Football owner Tom Dundon tells me a decision whether to shutter the 7 week old league could come as soon as tomorrow or days. He wants a development agreement with the NFL/NFLPA, but no evidence they are willing. Story in @sbjsbd.

CBSSports.com sports writer Ben Kercheval explains what is seemingly a conflict between the AAF and the NFL Players Association when it comes to creating a relationship between the two.

“The AAF essentially wants to borrow practice squad players to develop them while enhancing the quality of its product and building a working relationship with the NFL. The NFLPA, understandably, has concerns about player protection, though the AAF has offered to fund insurance for players hurt during their time in the Alliance,” Kercheval said.

In an interview on ESPN 98.1 FM on Sportscene with Steve Russell on Tuesday, Orlando Apollos’ head coach Steve Spurrier said he wishes Dundon would allow the season to play out and reevaluate it after.

“I really don’t have any idea what he wants to do. You know the Alliance was started with the purpose of giving ballplayers [a shot]. Guys that just didn’t make the NFL or made it and got cut, and they wanted to play ball. Maybe the NFL would give them another shot. That was the purpose right there. Then all of a sudden someone said ‘Let’s get their practice squad guys down in the Alliance.'”

In the afternoon interview, Spurrier also said the team is looking forward to playing on Saturday. Now after more reports and information have surfaced, Spurrier called off the Apollos’ Tuesday practice to hold a team meeting.

WATCH: Steve Spurrier says the @aafAPOLLOS should be champions, if this is indeed the end of @TheAAF.#Champions #Apollos #Orlando #AAF #WFTV pic.twitter.com/KumJjOe2uA

Currently, no new reports have surfaced confirming the definite demise of the AAF.

Chrissy Voltoline is a Junior studying Sports Media Journalism.
Previous High Expectations for Browns in 2019
Next Calipari seals the deal with Kentucky