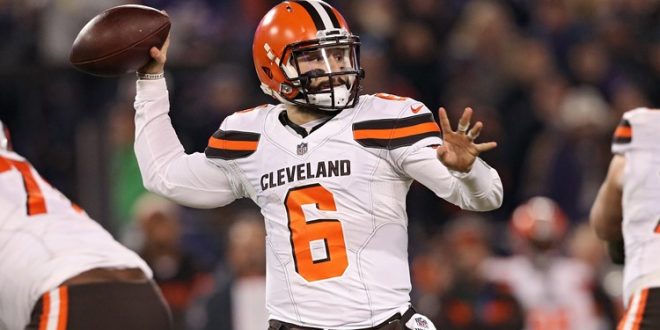 High Expectations for Browns in 2019

The Cleveland Browns have high expectations heading into the 2019 NFL season. They finished 2018 with an overall record of 7-8-1, including winning 5 of their final 7 games. On top of this success to close out last season, the Browns recently acquired superstar wide receiver Odell Beckham Jr from the New York Giants.

The Browns have the 5th best odds to win the Super Bowl, so even Las Vegas likes their chances of being successful this year.

This is the first time since the start of the century that most experts predict that the Browns will make the playoffs. They are loaded with offensive talent. Along with Beckham Jr, they have a young, promising quarterback in Baker Mayfield.

Cleveland also has two elite running backs in Nick Chubb and Kareem Hunt. Hunt is suspended for the first 8 games of the season for getting into a physical altercation with a woman last June, but this shouldn’t impact the Browns plans too much.

Beckham Jr. is also reunited with his college teammate and best friend, Jarvis Landry. Even though they both play the same position, they had made it clear that they wanted to play together at some point in their careers.

Beckham Jr. expressed his excitement to play with his close friend.

The Browns defense is led by a young and talented core. Defensive end Myles Garrett and corner back Denzel Ward highlight this group, which should continue to improve as the years progress.

They also nabbed defensive end Olivier Vernon from the Giants. Vernon does have a hefty contract, but he is still an elite talent and can provide a much-needed veteran presence in the defensive unit.

First year head coach Freddie Kitchens knows the outside expectations are extremely high entering the season. However, he won’t allow this to impact the expectations he has for his team.

With all of the talent on the roster, the sky is truly the limit. However, some teams in the past have struggled with talented rosters because there are too many mouths to feed and players get frustrated. Only time will tell how Baker Mayfield and Freddie Kitchens lead this immensely talented group.

With expectations sky high, Browns fans are the most excited they have been in decades.