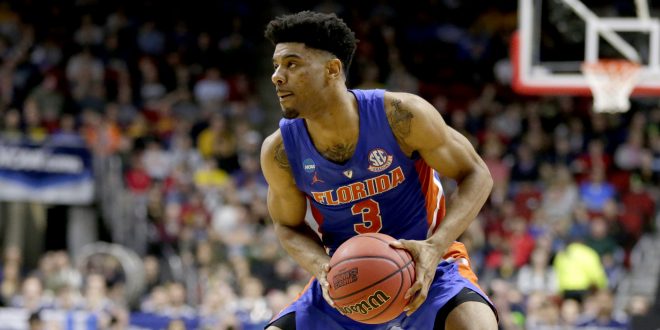 Florida's Jalen Hudson (3) during the second half of a first round men's college basketball game in the NCAA Tournament, in Des Moines, Iowa, Thursday, March 21, 2019. (AP Photo/Nati Harnik)

Jalen Hudson Reflects on His Time as a Gator

Jalen Hudson’s career with the Florida Gators has ended.

The now-former Gator guard played his last game wearing Florida across his chest on March 24 in the Round of 32 loss to Michigan. Following the loss, Hudson was reluctant to take of the jersey for the final time.

Now, with time to look back, Hudson joined SportsScene with Steve Russell Wednesday afternoon to talk about this year’s team and the future for both Hudson and Gator basketball.

Much of the excitement around the 2018-19 Gator men’s basketball team centered on the three freshmen making their debuts in the Orange and Blue. However, fans were also excited to see the return of Jalen Hudson to the roster. Hudson tested the waters in the NBA before deciding to return to Gainesville.

Many expected Hudson to hit the ground running to start the season. This wasn’t the case. Hudson drifted into the background and eventually lost his spot in the starting lineup.

Hudson says the start of the season was a difficult time for him off the floor.

Hudson was instrumental down the stretch to getting the Gators back to the NCAA Tournament for the third year in a row.

Hudson’s struggles to start the season was just one of the reasons Florida got off to a slow start. At one point, the Gators sat at 12-11 with the tournament chances slowly slipping away.

Then, the Gators ran off five straight wins to boost their tournament chances.

What also hindered Florida throughout the year was the team experimenting with different styles of play.

Head coach Mike White had to constantly tinker with the team’s approach given the amount of injuries and lineup changes the team endured.

Hudson says it was challenging to adapt to the different game plans and strategies.

Another change for this year’s team was the pace of play. The 2017-18 Gators ran up and down the floor, putting up high offensive numbers. This was due to the leadership and play of then point guard Chris Chiozza.

This year, Florida opted for a slower style to help the freshmen and play to Florida’s strengths on the defensive end of the court.

Hudson discusses how he had to change his game offensively to match this slower pace.

A coaching change led Hudson to transfer from Virginia Tech following his sophomore season in 2015-16. When it came time to deciding where he would continue his college career, Hudson had a predominant criteria for his schools. He wanted to go to a program where he already had a relationship with the head coach. Hudson considered Texas and Virginia before ultimately deciding to become a Florida Gator.

Hudson talks about his experience playing for Mike White and says the Gators are in good hands under the leadership of Coach White.

He expects White to return to a faster style of basketball in the near future.

The immediate future for Gator basketball starts with the transfer portal. Last week, three of Hudson’s former teammates announced they will be transferring from Florida to continue their playing career elsewhere. The trend of the transfer portal is becoming more prevalent in the college game, essentially becoming free agency.

As a transfer himself, Hudson talks about what goes into players deciding to transfer.

Hudson said on the show he has “no regrets” on his time as a Florida Gator. He believes he left it out on the floor for his team and his school. What Hudson cherishes the most about his time at Florida came in the classroom rather than on the hardwood.

He says going to graduate school was the main highlight.

Hudson said he’s grown the most during his senior season. The growth has fueled him more than ever for the NBA Draft process. If the NBA doesn’t work out for Hudson, he wants to pursue owning a successful business.

With the 2020 college football season in the rearview, the Gators are ready to go …