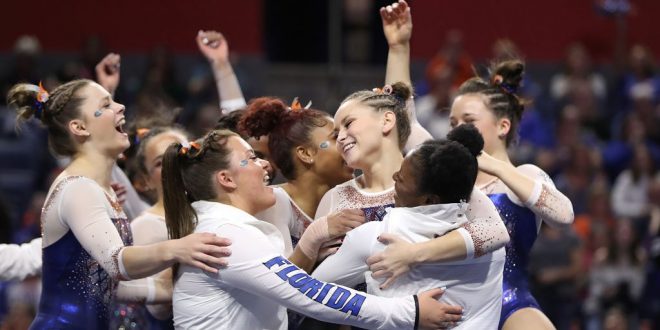 Tomorrow starts the first round of the 2019 National Collegiate Women’s Gymnastics Championships. However, this year’s bracket format is a little different than it has been in the past.

The NCAA Women’s Gymnastics Committee approved a new three-day structure for the NCAA Regionals and a smaller field at the NCAA Nationals.

This new three-day structure of competition will be at four different locations. The Regionals will still be comprised of 36 teams and nine teams will compete at each location.

Each day is split up into different rounds.

The two lowest seeded at each location compete in a dual meet to advance to Day 2: the eight-team regional competition.

Florida Gators gymnastics head coach Jenny Rowland explained that since the Gators aren’t one of the two lowest seeded teams they automatically start on Day 2.

Eight teams will compete in two four-team semifinals. The top two teams in each of those meets will advance to Day 3: the Regional Final

Four teams compete in the regional final. The top two teams will then advance to the NCAA Championships.

The two advancing teams from each of the NCAA Regionals will make up the new eight-team format for the NCAA National Championship.

The NCAA Championship used to feature a Super Six final. Now, the championship has a four-team final that is referred to as the “Fantastic Four Format.” The eight teams will compete in two four-team semifinals. The top two teams from those semifinals will then advance to the NCAA National Championship finals.

Coach Rowland said that the old format made for a really long competition.

The Women’s Gymnastics Championships will move to a four-team regional/super-regional bracket model for 2018-19: https://t.co/xdRCGfjQ74 pic.twitter.com/dp48bBMqKk

Opening round starts tomorrow at 6 p.m. The NCAA Championship will take place April 19-20 in Ft. Worth, Texas.

Sydney is a senior studying telecommunications with a specialization in sports media at the University of Florida. She is a multimedia sports reporter for ESPN 98.1 FM/850 AM WRUF and WUFT-TV.
Previous Donovan and Thunder stumbling into 2019 NBA Playoffs
Next Jalen Hudson Reflects on His Time as a Gator