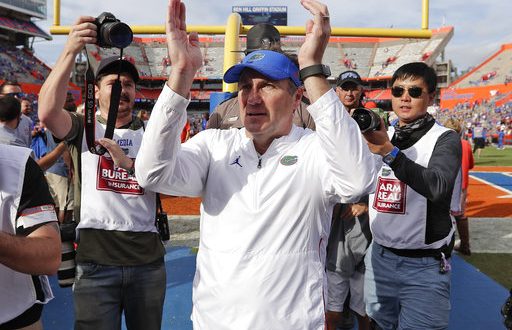 Spring is a time for improvement. Spring practice is especially important when you come back from winning a New Years six bowl and try to get back to that “Gator Standard” of being the best football program.

Dan Mullen is coming off a remarkable first year with the Gator Football program but he is not planning on slowing down that momentum any time soon.

“I have been pleased so far with our guys,” Mullen said. “I expect our team to go hard everyday, I want to see everyone compete at a high level and compete every day to be their best. We are looking at guys that are willing to improve, guys who aren’t game ready are they going to take the extra step to get ready. You see guys that may not be ready to play but are making big strides in order to get ready for when the season starts.”

When talking about willingness to improve, there’s no doubt Feleipe Franks came to Mullens mind. After one season under Mullen, Gator fans saw major improvements in Franks late in the season.

This past season Franks threw for a little bit under 2,500 yards and 24 touchdowns. Many were impressed by Franks performance during the Peach Bowl against Michigan and were excited to see what another spring/summer with Mullen would do.

“He’s gotten better and has made major improvements on working off his frustration,” Mullen said. “If he makes a bad throw, he doesn’t go and make three bad throws. Its been evident how comfortable he’s gotten with the offense. When you know the offense, your mind is not thinking about decision making and it helps with accuracy and quick decision making and that’s how you show you know what you are doing offensively.”

Despite improving offensively, the Gators still do have a young offensive line. With losing key players like Martez Ivey and Fred Johnson, the O-Line needs to be ready to be able to protect Feleipe. They need to be able to make gaps for the running backs.

According to Mullen, he saw some separation in last week’s scrimmage of the guys who are ready to go play in a game.

With the spring game in just over a week Florida fans will be able to see new faces.

“Its a huge deal for our players because it gives us a chance to put guys out on the field that have never played in a big crowd before,” Mullen said. “It will be a fun experience for our fans to see the future and see some players that have become an every down player for us that didn’t have much of an opportunity last season.”

The Orange and Blue game will be held on April 13th and will be free to the public to get a preview for what is to come this upcoming season.

Previous Magic streaking at right time, look to make a splash in playoff hunt
Next Bradford Softball loses against Williston 9-3