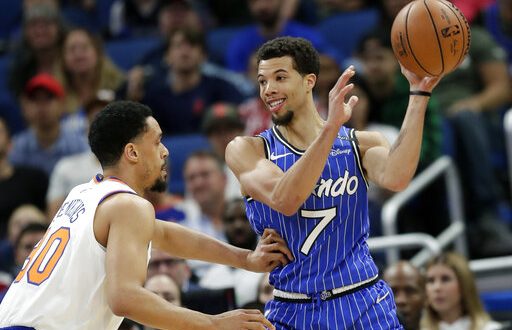 Magic streaking at right time, look to make a splash in playoff hunt

It’s been seven years since the Orlando Magic played basketball in May.

Led by Jameer Nelson and Glen Davis, the NBA landscape and the Magic roster was very, very different in 2012. Not one player from that team, which was ousted in the first round of the playoffs by the Indiana Pacers, remains on the current Magic roster.

Through January, it didn’t seem like the Magic had much of a shot at the playoffs. Sporting a 21-31 record, the Magic were ready to cross out another season and look ahead towards the NBA Draft Lottery and their chances of landing a highly-coveted prospect such as Zion Williamson.

Since February, though, the Magic have won 18 games and, after defeating the New York Knicks yesterday 114-100, are tied for the seventh seed in the Eastern Conference with just three games remaining.

The Magic have won eight of their last 10 games. They’ve lost on their home court just once since Feb. 1. Nikola Vucevic has averaged a double-double with 20.7 points and 12 rebounds this season.

Orlando has gotten hot at the right time, catapulting the Magic into the playoff hunt and a legitimate opportunity at a playoff berth. Pat Williams, Vice President of the Orlando Magic, credits the turnaround on the team’s attitude and confidence in one another.

The Magic have been a different team at home as of late. In this stretch where they’ve won 11 of 12, the Magic have averaged eight more points than their season average at 114.5 while sporting a 14.3 NET rating. They’ve also shot 38.5 percent from beyond the arc, and have held a +14.4 plus-minus rating, compared to the Magic’s season average of +0.1.

This command of the Amway Center has not just brought back excellent play in Orlando, but it’s brought back the fan appeal to the Magic.

With its recent win over the Knicks, ESPN’s BPI Playoff Odds give the Magic an 89.5 percent chance of making the playoffs, the second highest out of the five Eastern conference teams in the scramble for the final three spots.

Orlando’s three remaining games on its schedule — vs Atlanta, @ Boston, and @ Charlotte — rank as the 10th easiest schedule in the NBA, according to Tankathon. Orlando has one of the easiest roads to the playoffs and practically controls its own destiny as they can simply win out and punch a ticket into the postseason.

Just one game separates the six seed from the nine seed, ensuring a chaotic finish in the latter half of the Eastern conference as the Magic look to ride its momentum into May.