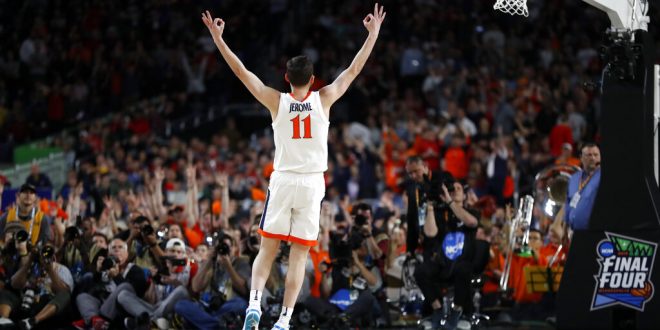 Virginia's Ty Jerome (11) reacts after shooting a 3-point basket during the first half in the championship of the Final Four NCAA college basketball tournament against Texas Tech, Monday, April 8, 2019, in Minneapolis. (AP Photo/Jeff Roberson)

After an upset loss last year in the first round of the tournament against 16-seeded UMBC, Virginia was looking for a fierce comeback. Last night, they accomplished just that with one of the greatest comeback stories of all time.

This was the first national title game to go to OT since 2008 when Kansas forced overtime with a Mario Chalmers three-pointer and eventually defeating Memphis.

Virginia was the lone No.1 seed to reach the Final Four this season. No.1 Duke lost by No. 2 Michigan State in the Elite 8, No. 3 Texas Tech took  No. 1 Gonzaga in the Elite 8, and No. 5 Auburn defeated No. 1 North Carolina in the Sweet Sixteen.

Check out the emotional roller coaster that was the first half on #FinalFour Twitter Live. #NationalChampionship pic.twitter.com/jfOwuccWII

This game took some time for both teams to get going. With 13:41 left in the first, the score was still only 7-3, Virginia. This slow start would not last long though as soon both teams were tied at 21 following a Tariq Owens dunk.

A few back and forth plays would happen between the teams for about the next minute of the game until a foul on Jay Huff would give Texas Tech free throws, and the lead 23-21.

After a score from both teams made the score 25-24, the game would go into another minute-long scoring drought until a two-point jumper from Texas Tech’s Brandone Francis would make the score 27-24.  Not even 15 seconds later though, Virginia’s Kyle Guy would tie the game with a three-point jumper.

Late into the first half, it seemed that the game would go into halftime tied at 29. However, Ty Jerome for Virginia had other plans.

With just one second on the clock before the half, De’Andre Hunter passed the ball to Jerome for a beautiful three-point shot. This gave Virginia a 32-29 lead at the half and the momentum to start the second half.

Not long into the second half, Kyle Guy would start the half how the first half ended, with a three-point jumper for Virginia. After two quick free throws for the Cavaliers, Virginia would be up by 8, 37-29.

The game stayed at this point until Texas Tech tried to cut down the lead with a two-point jumper from Brandone Francis making the score 38-31.

The lead that Virginia had created would not last long though, as soon Texas Tech started their comeback. A quick three-point jumper from Kyler Edwards with 14 minutes left to play, would put Texas Tech back within four. Virginia would try and reestablish the lead after two three’s and a jumper to put them back up by nine, and soon by ten.

Texas Tech would not give up though and late in the second half came back within one thanks to a layup from Norense Odiase. This made the game 59-58. After a foul on Mamadi Diakite, Odiase would tie the game at 59 with a free throw.

With just 22 seconds left and being up by three, it seemed that Texas Tech may pull off the upset. However, De’Andre Hunter made sure that Virginia would not go down that easily, and make a three-point jumper to end out regulation tied at 68.

With five extra minutes on the clock, Virginia got to work. A foul on Jarrett Culver early into overtime would give Virginia free throws to take the first lead of overtime. Texas Tech regained the lead quickly though after a three-point jumper from Matt Mooney.

This put Texas Tech up 73-70. However, after a three-point jumper and a couple of free throws, Virginia would be up by four with just 41 seconds left to play.

Virginia’s lead would extend after two back-to-back fouls were called on Texas Tech, putting the Cavaliers up 81-73. Texas Tech got back within six points, but with only eight seconds left Virginia proved too much to handle. The Cavaliers would win their first NCAA National Championship 85-77.