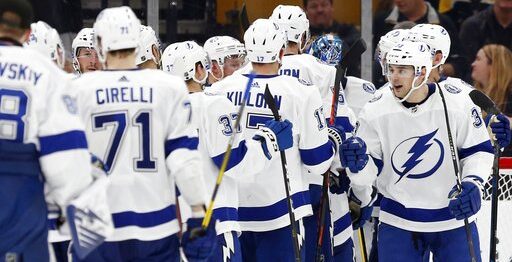 Lightning Storm Into Round 1 Series Against Columbus

The Tampa Bay Lightning storm into the Stanley Cup Playoffs.

Now, they are poised for a deep postseason.  They look to capture their second Stanley Cup in franchise history. Standing in their way in the first round is the Columbus Blue Jackets. The two start their series tonight at Amalie Arena. This isn’t the first time the Lightning come into the postseason with high expectations. in two of the previous three seasons, they fell in the conference finals.

Despite the playoff heartbreak of years past, the Lightning believe this year is different.

This season for the Lightning has been nothing short of historic. Their 62 wins on the year ties the NHL record for most wins in a season. The other team to do it was the 1995-96 Detroit Red Wings. The President’s Cup winners hold the top spot in many offensive statistical categories such as goals scored (325) and power play goals (74). The catalyst for the Lightning’s potent offense has been the play of right wing Nikita Kucherov.

Kucherov leads the league with career-highs in points (128) and goals (41). His point total is the most ever scored by a Russian-born player. Even with breaking this record, Kucherov isn’t the only Lightning player tearing up the ice this season.

Captain Steven Stamkos leads the team with 45 goals scored with center Brayden Point not far behind with 41.

Tampa Bay has also been getting it done on the defense thanks to the play in the net. Goalie Andrei Vasilveskiy leads the league with 39 wins and posted six shutouts.

There’s no doubt this Lightning team is special. This sentiment was expressed by Lightning head coach Jon Cooper.

"It's going to be a tough series. We're going to have to fight for every inch."#TBLvsCBJ | Brayden Point: pic.twitter.com/Y0tNC8OMH7

Playoff disappointment has been all too real for the Lightning. Deep runs in the postseason three of the last four years saw someone else hoist the Stanley Cup, with Tampa Bay left wondering what might have been. Those upsetting exits from the playoffs have lingered over the team all season. Now, the real season starts for Tampa Bay. They hope to erase those terrible memories.

It’s safe to call Columbus underdogs heading into this series. The Lightning have owned the Blue Jackets during the regular season. In their three meetings this year, Tampa Bay won all three in convincing fashion. The combined score in these three Tampa Bay wins is 17-3.

Assuming the role of the underdog is not a problem for Columbus defenseman Zach Werenski.

Despite the regular season success against Columbus, Stamkos says it’s a clean slate.

Cooper on Game 1: “We earned home ice for a reason. Don’t let that slip. Take advantage of everything you can.” #TBLvsCBJ pic.twitter.com/tyQaWEF60b

During this memorable season, the Lightning have protected home ice. They boast a 32-7-2 record on the year. They hope this strong play at home can translate in the postseason. Tampa Bay and Columbus face off tonight with puck drop from Amalie Arena set for 7 p.m. You can hear the coverage on WRUF starting at 6:30 p.m.