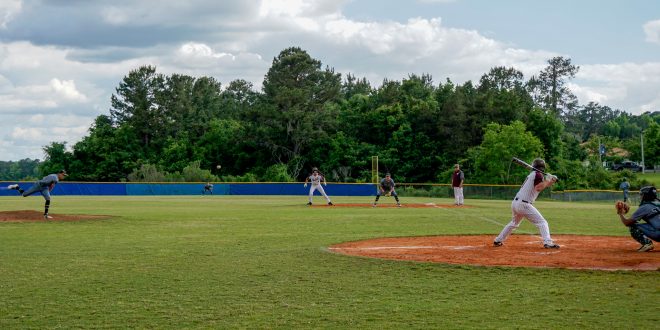 Oak Hall's Blake Beltz eyes the oncoming pitch from St. Joseph. Beltz recorded an RBI in their loss on April 10.

Statistical leaders for the Flashes included Evan Rodriguez, James Drysdale and Cameron Helt with two RBIs each. Oak Hall’s Bryce Beltz had two RBIs as well; with Blake Beltz, Andrew Clark and Mason McElroy also driving in a run each.

This game was rescheduled from the previous day due to weather issues. St. Francis Catholic hosted the game as well due to Oak Hall hosting the Track and Field District Tournament.

Oak Hall led early, with two runs in the first inning and one in the second.

At the end of the second inning, @OakHallBaseball leads St. Joseph 3-1. This game was rescheduled from April 9. due to weather. @ESPNGainesville. pic.twitter.com/UiMcvQq3Sl

Andrew Pickens pitched well for the Eagles early, consistently closing innings with strikeouts. Oak Hall’s outfielders also made spectacular catches to help the cause.  The game took a turn for the worst once Cole Gonzales came in to relieve Andrew Pickens on the mound for the Eagles.

A shift of momentum

The pitching change from Pickens to Gonzales left much to be desired for the Eagles in the fifth inning. Oak Hall catcher Bryce Beltz struggled to corral pitches, causing runners to advance and even giving up runs in the process.

Regardless of the pitching woes, St. Joseph could not pull away. Through nine at-bats at the top of the fifth inning, the Flashes only were able to score two runs to get out to a one-run lead.

St. Joseph held tight with excellent outfield play in the bottom of the fifth to solidify their run. Marc Maschio pitched to three batters in the inning, striking out one and catching a pop fly to end the inning.

Too little, too late

A pop-fly and a double play in the top of the seventh retired St. Joseph hitters in the seventh, but the superb pitching of Maschio shut down any hopes for an Oak Hall comeback. Maschio struck out two batters in the inning, and a contentious call at the end of the game called Oak Hall’s James Leber out at home, which could have kept an Oak Hall rally alive.