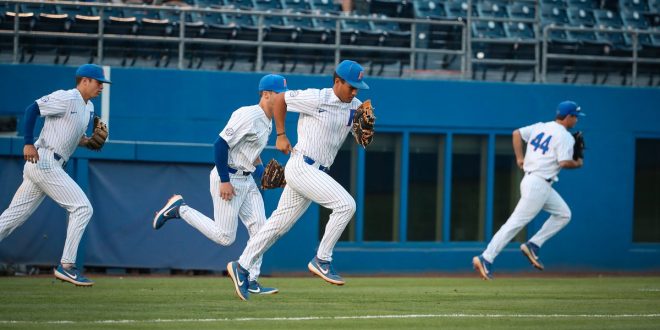 Despite inconsistency on the mound, the Gators’ made minimal fielding errors and found a rhythm at the plate. In addition, South Carolina’s struggles on the mound put them in a deficit that they wouldn’t be able to overcome.

After a scoreless first two innings from both teams, the Gators got out to a early 6-0 lead in the bottom of the third.

Brady McConnell put Florida on the board with a three-run RBI homer to right field. Furthermore, McConnell recorded his seventh home run of the season and leads the Gators will .381 batting average.

The Gators offense continued to roll with RBI singles from Kendrick Calilao, Cory Acton, and Jud Fabian. Calilao, who leads the SEC in RBI (37), went three for four at the plate and recorded one RBI. Additionally, Acton and Fabian each recorded two RBI.

In the fifth inning, South Carolina scored their first run of the night off of a sac-fly from George Callil. Florida responded with an RBI double from Acton that put the Gators up 7-1.

South Carolina capitalized off of mistakes in the seventh, scoring two runs off of back-to-back wild pitches from Florida pitcher Hunter Ruth.

In the bottom of the eighth, the Gators recorded two insurance runs to secure the victory over South Carolina. Calilao scored off of a wild pitch, while Acton scored off of a sac fly to put Florida on top 9-3.

The Gamecocks continued to put up a fight in the top of the ninth, scoring two to cut the Gators lead 9-5. Ian Jenkins RBI double brought Jordan Holladay in for the run, followed by a sac fly from TJ Hopkins that allowed Jonah Beamon to score.

Struggles on the Mound

The story for both teams proved to be struggles on the mound.

South Carolina’s Reid Morgan began the game with two strong innings but quickly fell apart in the bottom of the third. Morgan surrendered a home run to McConnell that would be the first of a series of five hits.

Morgan finished the night after the fifth inning with a final stat line of (9H, 7R, 7 ER, 3 BB, 2 K). Florida’s performance on the mound unmatched the expectations of a Kevin O’Sullivan team. Florida pitchers gave up eight walks and four wild pitches against South Carolina.

Starter Tommy Mace finished the night after six innings, allowing three hits and two runs. Relief pitchers Ruth and Nolan Crisp had a tough time on the mound for Florida. Ruth went 0.2 innings, allowing one hit and one run. Crisp had a strong eighth inning, but gave up two runs in the top of the ninth before being relieved by Ben Specht. Specht ended the inning by retiring three consecutive batters.

Christian Scott will get the start on the mound for the Gators in Game 2 against South Carolina. Scott is currently 3-1 on the season with a 3.60 ERA.

You can catch live coverage of Friday night’s match-up on the SECNetwork+ or listen live at 98.1 FM/850 AM WRUF.

Previous NBA Playoffs: Magic gearing up for tough test against the Raptors
Next Masters Update After The First Round