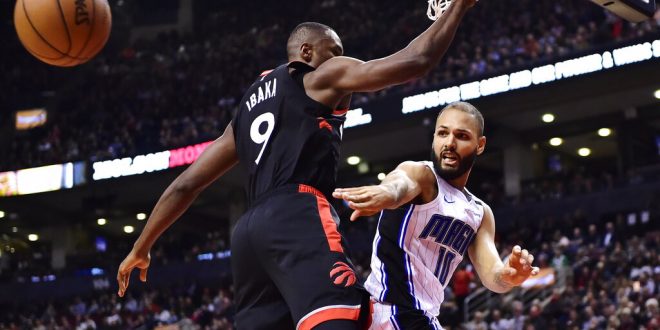 NBA Playoffs: Magic gearing up for tough test against the Raptors

For the first time in seven years, the Orlando Magic will be playing meaningful basketball in April this weekend. On Saturday, the team will be in Ontario to take on the Toronto Raptors. This marks their first playoff series since they lost to the Indiana Pacers in 2012.

The Magic clinched a playoff spot on Sunday after defeating the Boston Celtics 116-108. Orlando (42-40) checks in as the seventh seed in the Eastern Conference, while Toronto is the second seed with a 58-24 record. Tip-off is scheduled for 5 p.m.

Playing to their strengths

The NBA playoffs are powered by stars, and Magic center Nikola Vučević is one of the top big men in the entire association.

During the season, Vučević put up 20.8 points per game on 51.8 percent from the field and averaged 12 rebounds a game. The All-Star center had a 25.53 Player Efficiency Rating, which was seventh in the entire NBA.

The Magic have a bonafide scorer with Vučević, but head coach Steve Clifford also likes to move the ball around.

Orlando is just one of five remaining teams with four qualified players averaging at least 15 points per game. The other four teams are the Philadelphia 76ers, the Los Angeles Clippers, the Milwaukee Bucks, and the Houston Rockets.

Although they only average 107.3 points per game, the Magic dish out 25.5 assists a contest as a team. Along with spreading the wealth, Orlando knocks down a health 78.2 percent of their shots.

In order for the Magic to upset the Raptors, relying on Vučević and getting others involved will be a couple of keys to success.

On the defensive side of the ball, stopping the productiveness of Kawhi Leonard is a huge priority for Clifford’s group.

Leonard an elite player in the NBA, scoring 26.6 points per game on nearly 50 percent shooting this season. The three-time All-Star also collected 7.3 boards a contest, and is also a defensive workhorse.

Keeping Leonard from scoring is a tough task as he can create a shot in a multitude of ways. Leonard will also be fresh coming into the playoffs as he averaged only 34 minutes per game and rested for 22 games.

Toronto’s roster is also well-rounded outside of just Leonard. The team has an emerging talent in Pascal Siakam, but also gets contributions from savvy veterans such as Kyle Lowry and Danny Green.

The best-of-seven series between the Magic and the Raptors could potentially last until April 27. After two games in Toronto, the series will shift to Orlando starting next Friday.

Games five, six and seven will be played if necessary.