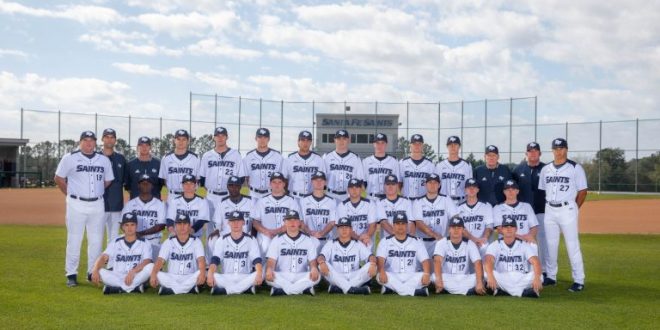 The Santa Fe Saints had a comeback win against the Daytona State College Falcons Friday night 10-7. The Saints were down 4-0 until the bottom of the second inning when they had a spark of life.

The Saints gave up two leadoff home runs in the first two innings and found themselves in a 4-0 hole.

The @santafesaints make a huge comeback in the 2nd inning with 7 runs in 5 hits! Saints take the lead 7-4 against the Falcons. @ESPNGainesville

The second inning provided life for Santa Fe when Jonathan Logsdon had a rbi single to left field that plated Jarod Cande home. Directly after, Caleb Stafford had a rbi single that slipped past the Falcons and sent Brock Edge home. An error by the Falcon’s pitcher allowed Isaiah Perry to run home and then Logsdon was able to get home after Garrett Mathes was walked to first with bases loaded, tying the game 4-4.

The inning finished off with another error by the Falcons leading to Stafford running home and a two rbi blast from Edge to send another two Saints home. The Saints finished off a dominant second inning with seven runs in five hits, taking the lead 7-4.

Once down 4-0, the @santafesaints are victorious against the Daytona State College Falcons 10-7! @ESPNGainesville

The Saints never looked back with a Kyler Marquis sac fly rbi to send Logsdon home in the bottom of the fifth and also capitalized on another error by the Falcons to send Parker Biederer home, going up 9-4. The Saints had their final score of the evening in the bottom of the sixth inning with a solo home run by Cande to put the icing on the cake.

This is the seventh victory in a row for the Saints who now improve to 31-13 on the season and 12-7 in conference play. Santa Fe will play College of Central Florida at home Monday in an important conference game.