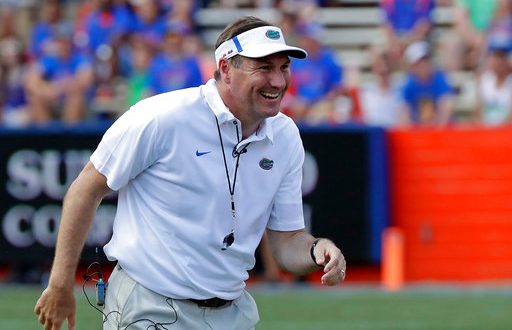 Although football season is still months away, year two of the Dan Mullen era at Florida kicks off with the Orange & Blue Game.

For our home. For #GatorNation. For each other.

What to Watch Out For

Feleipe Franks: After closing last season with a hot stretch of games, it will be interesting to see how confident and accurate he looks with another offseason under his belt.

Emory Jones: The 6-3 dual-threat is entering his sophomore season after redshirting his freshman season. A lot of eyes will be on Jones to see how he has developed going into this season.

Kyle Trask: After breaking his foot at the end of last season, Trask is looking to bounce back into a backup role.

Jalon Jones: Jones is a true freshman. The spring game will give him an opportunity to get a feel for collegiate football.

John Hevesy proved to be an effective offensive line coach last season, but he has a challenge ahead of him this season. The line lost four starters. With a multitude of freshmen in the unit, watch out for the cohesiveness of the line during the spring game.

Lamical Perine has emerged as the clear-cut starter for Florida, it will be interesting to see how he handles the role. Aside from Perine, both Malik Davis and Dameon Pierce are going to have to step up in the run game.

The Orange & Blue Game always serves as a great opportunity for Florida’s young players to get a feel for the game. In addition, the game gives the coaching staff a further evaluation of how the freshmen are performing in advance of the season.

The Orange & Blue game is on Saturday, April 13th at 1  p.m. at Ben Hill Griffin Stadium. The teams will be decided today, April 12th by Bryan Kornblau and Tommy Shannon. Kornblau and Shannon, who are serving as honorary head coaches for the game, are supporters of the program.