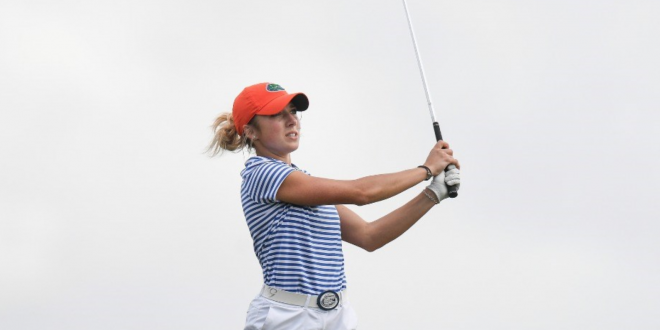 What initially looked like a successful run at the SEC title became somewhat of a slippery slope for the Florida women’s golf team.

Florida opened up the 54-hole stroke play portion at Greystone Golf & Country Club in killer form. It was arguably the best team showing all spring, with no player finishing outside of the top-30. Marta Perez, Sierra Brooks and Clara Manzalini all finished inside the top-10 all at or below even par.

But the uphill climb to the top of the stroke play leaderboard failed to take them over the edge when they needed it the most.

The 2019 SEC Championships kicked off its first three days with a 54-hole stroke play tournament. The top eight teams to finish advanced to the second half in match play. Florida rode past teams ranked ahead of them with a one-under finish, including No. 11 South Carolina, No. 6 Arkansas and No. 4 Vanderbilt.

The first two days of play kept Florida in the lead. Most notably, Perez built herself a hefty tie for second with 7-under. Brooks emerged in the second round to shoot a 69 to enter the top ten. The third round, while the weakest overall, still carried them to a two-stroke lead over South Carolina to take the first seed.

Florida seemed to be in fine shape for the second half of the conference championships. But match play had a mind of its own.

Florida was paired beside eighth seed Ole Miss, who struggled in stroke play with a 28-over finish. But Ole Miss turned its luck around and found a second wind, staying on pace beside Florida.

Both teams were all square after the first nine. But Elin Esborn was the first to drop her match on 16 at 3-and-2, losing to Kennedy Swann. Manzalini swooped in with a win on three of her last six holes, defeating Conner Beth Ball on the 15th at 4-and-3. Brooks would emulate a similar win on 15 at 4-and-3 over Ellen Hutchinson-Kay.

Addie Baggarly made some magic of her own in the middle of her round, but couldn’t seal the deal and dropped the match to Julia Johnson on the final hole 2 up.

Both teams awaited the result of the wire-to-wire match between Perez and Macy Somoskey. Each player entered the final hole all square and parred 18, incurring a playoff between the two.

Both players found themselves in a greenside bunker on their second shot, but Somoskey’s up and down sand save action placed her two feet from the hole. Perez had trouble with her ball inside the bunker, with her first swing only furthering the ball within the sand. A rules official was required to help Perez dig the ball out, but at that point, it was much too late. Her second attempt out of bunker trouble would send her 20 feet away from the hole, giving Somoskey the victory by two strokes.

Even with the upsetting defeat, the talented Florida team has a viable shot at making NCAA Regionals. The rest of their postseason fate will be decided on the NCAA women’s golf Selection Show, airing on Wednesday, April 24 at 5:30 p.m. on Golf Channel. 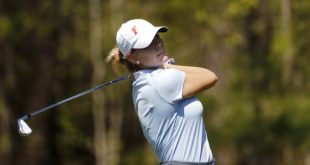 Florida women’s golf returns to the postseason, this time in search of a winning formula. …