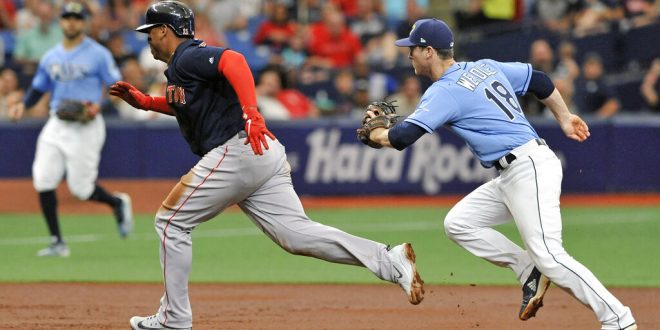 Tampa Bay Rays' Joey Wendle (18) chases Boston Red Sox's Rafael Devers on a rundown between second and third base during the second inning of a baseball game Sunday, April 21, 2019, in St. Petersburg, Fla. Wendle tagged out Devers on the play. (AP Photo/Steve Nesius)

The Tampa Bay Rays were the best team in baseball for the first couple of weeks of the 2019 season but it seems they have hit their first bump in the road.

The Rays lost their fourth game in a row as the defending world series champions Boston Red Sox defeated Tampa 4-3 in 11 innings.

In Tampa’s last four losses, they have lost by a combined five runs.

It was the same story on Easter Sunday as the late game run alluded them once again. The Rays took the loss despite an excellent start from Tyler Glasnow. The former 5th round pick cruised through five innings of work, only allowing one run on a Mitch Moreland home run before running into trouble in the 6th inning.

The 25-year-old got Andrew Benintendi to ground out to begin the inning but then gave up a one-out single to Mookie Betts. With the right-hander’s pitch count reaching 76 pitches, Rays manager Kevin Cash elected to utilize his bullpen.

Adam Kolarek walked the only batter he faced in Steve Pearce, forcing Cash to use his bullpen once again. Chaz Roe also found himself struggling with command issues as he also walked the first batter he faced in JD Martinez, which loaded the bases with one out. Boston then made Tampa pay the price as Xander Bogaerts knocked in two runs with a single into right centerfield, giving the Red Sox a 3-2 lead.

Xander Bogaerts with the two-run double to give the Red Sox the lead! pic.twitter.com/AVcFy9xwet

Roe would load the bases once again on another walk but was bailed out after Michael Chavis grounded into a double play, ending the top of the 6th. Tampa struggled to get into a rhythm at the plate as former Ray, David Price, had himself a nice day with his 10 strikeouts in five innings of work. Price only allowed two runs on the day.

The Rays came back to tie the game in the 8th on Saturday and had the same fate on Sunday as Tommy Pham hit a solo home run to the opposite field off Matt Barnes to tie the game at 3.

Two scoreless innings passed before the Red Sox scored the game’s final run. With runners on 3rd and 2nd with one out, Christian Vazquez hit a SAC-fly to centerfield to score Rafael Devers. Boston closer Ryan Brasier set down the Rays 1-2-3 in the bottom half of the 11th to complete the series sweep.

It could be worse for Tampa. They are still sitting at 14-8 and 2.5 games ahead of the New York Yankees for first place in the American League East.

Tampa Bay won’t have too much time to think about the series sweep as the Kansas City Royals visiting Tropicana Field for a three-game set starting on Monday. First pitch from the Trop is at 7:10 p.m.