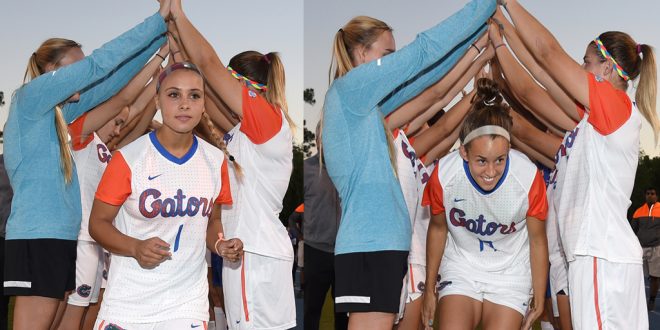 Two University of Florida alumnae have been included in Jamaica’s final 23-player roster for this summer’s 2019 FIFA Women’s World Cup in France.

Twenty-two out of the 23 players, including Lauren Silver, were announced by Jamaica’s head coach, Hue Menzies, on May 22 during the team’s visit to South Florida. However, on May 23, Havana Solaun who was not traveling with the team was cleared by FIFA and announced as Jamaica’s 23rd representative.

Havana Solaun was named as the #ReggaeGirlz 23rd player.

The roster is complete. This is the group that will face Scotland in Glasgow on May 28.#CheckItOuthttps://t.co/i9yxe9FZWA

The city of Miramar, Florida, hosted Jamaica’s women’s team, also known as the Reggae Girlz, from May 21 to May 23. This visit was a special send-off after the Reggae Girlz became the first Caribbean national team in history to qualify to a Women’s World Cup.

The send-off celebration had dinners, press conferences, a celebrity match between Jamaica and Haiti and a preparation match featuring Jamaica and FC Surge. Silver featured in Jamaica’s 2-1 victory over FC Surge.

Getting to Know Lauren and Havana

Silver and Solaun share similarities in their lifetime path to a professional soccer career.

The 26-year-old Gators, Silver and Solaun, are both Florida natives. Silver was born in Miami while Solaun was born in Gainesville. They also shared the pitch inside the Donald R. Dizney Stadium for four years at UF. Silver plays professional soccer for SK Trondheims-Ørn while Solaun plays for Klepp IL, both Norwegian teams.

Silver shared that UF’s academics and soccer program enabled her to become the player and person she is today.

“Becky, Vic and Alan (coaching staff) did a great job coaching me… and set me up to play pro and now, I’m here going to the World Cup,” said Silver. “I like to say I take pieces of that with me wherever I go.”

“The first thing that comes to mind, for me, is home,” said Silver. “I would spend Spring, Summer C and Fall working out, doing training, working in camps and doing school stuff.”

Like any other student, Silver liked to have some fun.

“Pita Pit, that’s the spot,” said Silver laughing followed by “Pita Pit after Grog House… anyone who was in my class knows what was up in Grog House.”

Silver and Solaun were also in the Gators team that started the helmet trend throughout Gators athletics.

“One of the players in our team, Karina, got into a really bad scooter accident,” said Silver. “After that, we weren’t allowed to ride without a helmet and other teams were forced to do it as well… we were that notorious team that made that happen.”

What Are These Players All About?

Silver and Solaun featured in Coach Becky Burleigh’s UF soccer team from 2011 to 2014 and she still has clear recollections of both players.

“I remember the day that Lauren Silver committed,” said Burleigh. “I really can’t remember someone who was more appreciative of committing to Florida than Lauren.”

Burleigh opened up about some attributes that have helped Silver reach the level she is in.

“She’s really tenacious, she’s really tough and she will just work the entire game,” said Burleigh. “She’s someone you know that is never going to quit.”

One of Burleigh’s favorite memories of Solaun was during her senior year while playing in the NCAA Tournament.

“She was just really locked in and was providing such amazing leadership to our team,” said Burleigh. “She played through mistakes, adversity and became a leader taking our team to another level in the tournament.”

Burleigh went on to describe Solaun as a “cerebral player” who knows how to read the field and game with her “terrific vision.” She also shared that Solaun possesses other strengths such as versatility in attack, athleticism and her technical ability.

The President of the Reggae Girlz Foundation, Michelle Adamolekun, raises money for women’s soccer in Jamaica and also knows what Silver and Solaun are capable of.

“Silver is a force, she’s a lefty, she’s strong and she’s aggressive as it relates to that left-back position,” said Adamolekun. “We’re excited to have her because I know that when she hits that field and the ball is at her feet, she’s going to give 100 percent.”

Similarly, Adamolekun said, “Havana is a fierce force in the midfield.” Adamolekun added, “as we know, the midfield commands the field of play and she’s suited for that position.”

Reggae will meet Samba when Jamaica plays Brazil in their first World Cup match on June 9. Silver knows that playing against Brazil will be a big deal.

“The game is actually sold out,” said Silver. “What I think is awesome about this matchup is that Brazil and Jamaica have this love for each other… it’s going to be an explosion of happiness, fire, passion, intensity and football.”

Burleigh did not hesitate to say that the “Gator nation is really proud of both them.” Burleigh will be watching from the stands in France and she wishes the best for her two beloved players.

“Enjoy the moment and really take it all in,” said Burleigh. “It’s just going to be a moment that they’ll remember for the rest of their lives and I’m excited to watch them be a part of it.”

So excited to watch these two @GatorsSoccer alums play in France next month for the @ReggaeGirlzJA at the @womensworldcup ! pic.twitter.com/M7TDusSEwx

Figuring out a plan to make it big in the soccer scene in the U.S. or anywhere else in the world. For now, I'm having a blast writing for ESPN Gainesville and learning a lot from managers and students around the workplace. I'm covering the TV beat for Gators Soccer. What a team! Follow me on twitter: @J_AguerrevereUF
@@J_AguerrevereUF
Previous Bruins Take Aggressive Game One in Stanley Cup Final
Next Hall of Fame QB Bart Starr Passes Away at 85