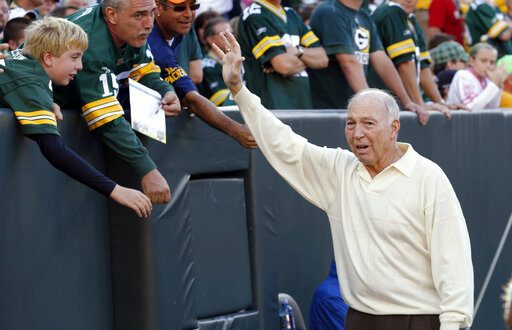 FILE - In this Sept. 10, 2012, file photo, former Green Bay Packers quarterback Bart Starr waves to fans during the Packers' NFL football game against the San Francisco 49ers in Green Bay, Wis. Bart Starr, the Green Bay Packers quarterback and catalyst of Vince Lombardi's powerhouse teams of the 1960s, has died. He was 85. The Packers announced Sunday, May 26, 2019, that Starr had died, citing his family. He had been in failing health since suffering a serious stroke in 2014. (AP Photo/Jeffrey phelps, File)

Hall of Fame QB Bart Starr Passes Away at 85

Starr played for the Packers his whole career from 1956-1971. He was part of the iconic Packers teams of the 1960s that was led by legendary coach Vince Lombardi.

Bart Starr was a true gentleman and one of the kindest people I knew. I had elbow surgery following our ‘95 Super Bowl in Birmingham and Bart made a visit to the hospital. To this day, not sure how he even knew I was there. #ripbart

The Packers legend won a total of five NFL championships in his career throughout a seven-year span.

Starr was still part of the Packers organization after his playing days were over. He coached for Green Bay for nine years from 1975-1983. He also took the form of general manager during his first six years of his coaching tenure.

Bart Starr was not the most flashy quarterback in the 1960s like Joe Namath and Johnny Unitas but, when it came to playing in the playoffs Starr was almost perfect. Starr has the best postseason winning percentage in NFL history.

With six trips to the playoffs, Starr is 9-1 which translates to a .900 winning percentage. His passer rating in the playoffs is 104.8. This record still stands as the best for quarterbacks with a minimum of 150 attempts int he postseason.

One of Starr’s most iconic postseason plays is the 1-yard line dive into the endzone to win Super Bowl II in 1967. This game is also known as the Ice Bowl for its grueling winter conditions that day in Lambeau Field.

Not only was Starr the MVP for Super Bowl I & II, but he also was MVP for the 1966 NFL season.

During the prime of his career, Starr was a four-time Pro Bowl selection, a one-time All-Pro and was named to the 1960s All-Decade team. He finished his career with a record of 94 wins, 57 losses, and six draws. He threw for over 24,000 yards which led to 152 touchdowns.

Bart Starr will always be remembered as a winner and one of the greatest for the game of football on and off the field.