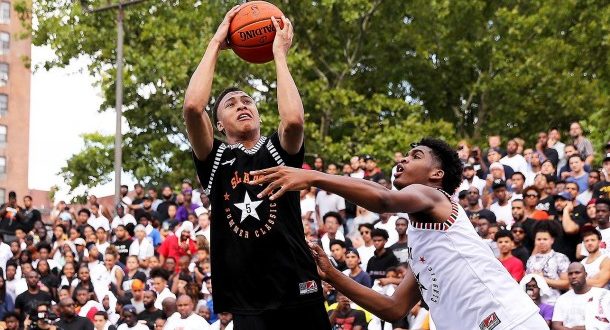 On Tuesday afternoon, RJ Hampton chose to play overseas and skip college. He was considering Kansas, Texas Tech, and Memphis.

Hampton signed a contract with the New Zealand Breakers of the Australian National Basketball League. He becomes the first player to willingly skip college for an international pro contract, for reasons other than academic or other eligibility problems.

He has said that playing college basketball has never been a goal.

He feels like this is a more efficient and faster way to get into the NBA. In a phone interview, Hampton revealed one of his main reasons for choosing professional basketball overseas instead of college basketball. The success of Luka Doncic inspired him to take the alternative route to get to the NBA. “The way he came into the NBA so ready and so poised really showed, and that’s why he’s up for Rookie of the Year and that’s why he had such a great season.”

Before declaring this decision, after taking a visit to Memphis, they became his top target to attend. In September, he took a visit with five-star prospect guard Jalen Green. The two also met up with James Wiseman, who decided to sign with Memphis.

Hampton hopes his decision will help sway other high school prospects in the near future take the same path.

The New Era of Basketball Players

This new era of high school athletes are already switching away from the rule of attending college for one year out of their senior year of high school. This rule has been in place since the 2006 NBA draft. NBA commissioner Adam Silver said that the 2022 draft will most likely be the first to allow players to enter the draft straight out of high school.

Hampton’s decision comes with the current debate if college players should be compensated in college. They are producing tens of millions of dollars for the Universities, with no current pay. His father, Rod Hampton, said his son had been offered more than $1 million from a professional team in China. In the end, RJ felt the Breakers’ was the best fit.

The part owner and manager of the Breakers’, Matt Walsh, said Hampton signed a two-year deal, with an $800,000 buyout by any NBA team that selects RJ Hampton in the NBA draft.