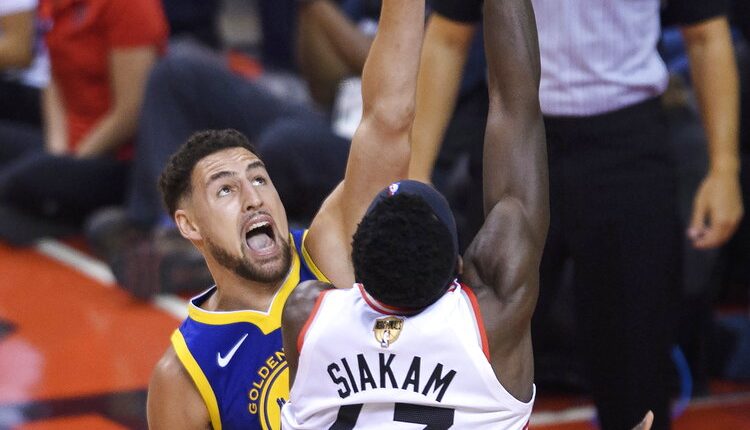 Pascal Siakam came into the NBA Finals with 50/1 odds of winning Finals MVP.

That was before Siakam sank 32 points to lead the Toronto Raptors to a 118-109 win in Game 1, giving Toronto its first taste of a Finals victory in franchise history.

Toronto’s historic Game 1 win also came at the expense of Golden State’s history, as Steph Curry and crew are looking at their first 1-0 deficit in the Finals during the Warriors’ run of five-straight appearances.

Curry scored a game-high 34 points, but lack of support from his teammates, especially his bench (36 points), allowed the Raptors to pull away late. Toronto is 3-0 (including the playoffs) against Golden State this season.

Other noteworthy performances behind the right-handed stroke of Siakam include NBA MVP candidate Kawhi Leonard (23 points) and Marc Gasol (20 points).

The “Raps” also received a helping hand from bench-man Fred VanVleet (15 points), who took on a sixth man role for Toronto, tacking on 33 minutes of game time.

“I thought he played with really good composure,” Nurse said. “I thought he got to his spots, got on balance and was patient. He had a couple of real tough ones go in for him as well.”

The tough ones did go in. Siakam shot 14/17 (82.4 percent) from the floor. He also added eight rebounds and five assists to open up Toronto’s first-ever campaign for the Larry O’Brien trophy.

Warriors coach Steve Kerr wasn’t as pleased with the result. He shook off any reasons to doubt Golden State after a singular basketball game, regardless of its magnitude.

“It wasn’t our best night,” he said. “We just got outplayed, simple as that. Move on to the next one.”

Warriors Will Be Without Kevin Durant For At Least Another Week

Kevin Durant, whom many believe to be the best player in all of the NBA, has missed six-straight playoff games with a strained calf.

While the Warriors handled the Rockets and brushed aside the Trailblazers in his absence, the result of Game 1 proves his extended injury timeout is hindering the Warrior’s production.

If Golden State’s problems persist, Kerr’s message of “move on to the next one” and Draymond Green’s self-proclaimed title of “GOAT defender” will be put under a massive microscope.

Kevin Durant supporting his guys in Game 1 of the #NBAFinals pic.twitter.com/KoVZtpWv3q

Simply put, the Warriors need Durant back. One bad game north of the border doesn’t erase the Warrior’s dominance without Durant coming into Thursday’s Game 1 match, but it does erase the wide array of  comments on Durant’s meaning to the franchise.

Analysts such as Jay Williams lashed out at those who tried to question Durant’s impact on the Warrior’s success after Game 1.

This argument that the @warriors don’t need @KDTrey5 to win a chip needs to stop.

A Chance for Golden State to Rebound Before Durant’s Return

The Warriors will look to stride into Scotiabank Arena and even up the series at 1-1 before returning to their final games at Oracle Arena next week.

The Raptors have a chance to take a 2-0 lead in the series and carry the momentum they gained on Thursday night.

In what looks to be an entertaining match-up come Sunday, the Warriors need a win without Durant before he is healthy enough to return next week.

If they come back home down 2-0 and are busy licking their wounds, rap star Drake and the Toronto Raptors may be on their way to securing the city’s first NBA Crown.

Drake spilled his drink on the court. He constantly taunted Draymond Green. He was late returning from halftime. Here's what we learned from spending an entire NBA Finals game watching the Raptors' superfan. https://t.co/O6TkxQnQ0s