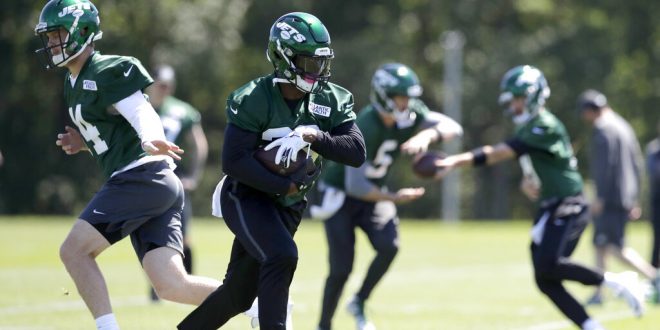 Le’Veon Bell Suits Up for First Day of Jets’ Minicamp

After sitting out the 2018-2019 season due to contract disputes, Le’Veon Bell showed up to New York Jets minicamp with high hopes for the upcoming season. The running back signed with the Jets as an unrestricted free agent during the offseason.

The change of scenery seemed inevitable for Bell after his frustration with the Steelers front office. The Jets are coming off a disappointing 4-12 season finishing last in the AFC East Division.

With some offseason moves and retaining their young core, Bell believes the future is bright for the Jets and was optimistic after his first day of minicamp.

In New York, Le’Veon Bell will be sharing the field with second-year quarterback Sam Darnold.

Darnold was the No.3 overall pick in the 2018 draft. This past season Darnold had some promising, young offensive pieces in Robby Anderson and Quincy Enunway at the wide receiver position.

Not only do the Jets feature those two on the offensive end, but they also have running back Ty Montgomery. Adding Bell to the mix of these talented players gives Darnold a lot to look forward to the upcoming season. This minicamp will be the first step for Darnold to help Bell become acquainted with the offense.

Gase will be inheriting a young team but he is looking forward to Bell spearheading the offense this season.

Reports came out that Adam Gase was against the Jets signing Bell and thought the runningback was overpaid. After those statements, many thought that there will be chemistry issues between the running back and head coach.

Le’Veon Bell spoke about his relationship with Gase and he immediately changed the narrative between both of them.

Gase’s relationship with Bell will be heavily viewed throughout the remainder of the offseason leading up till game 1.

It is still too early to predict how Bell will be integrated into Gase’s playbook, but the talent is there now it is just about putting it all together.