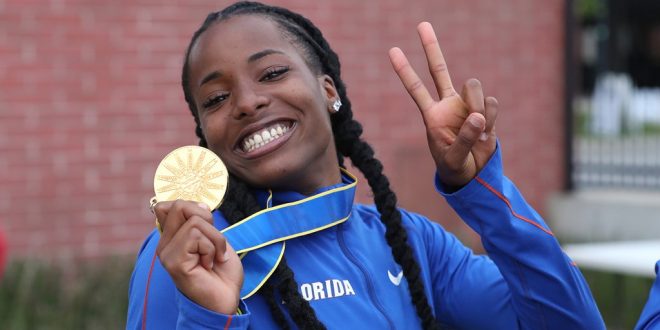 Gators at the Outdoor Track and Field Championships

The NCAA Outdoor Track and Field Championships begin today. Florida is heading into competition with a No.2 ranked men’s team, who have 16 entries. The No. 10 ranked Women’s team brings in nine entries. Together Florida has 25 combined entries which are tied for third most.

The Gator’s men’s track and field team has the opportunity to sweep the NCAA Indoor and Outdoor Championships for the second time in program history. Its first sweep came in 2012.  They placed second at last years Outdoor Track and Field Championships and won the title the two previous years. They have also won or placed second in 22 out of 33 NCAA Championships since 2003. This was the first year as head coach for Mike Holloway.

The men’s team is one of three programs in Division I history to post seven straight top-3 finishes at both NCAA Indoors and Outdoors.

Florida’s men’s team brought the Indoor Track and Field Championship title back to Gainesville already this year, and are looking to bring home another. Should they win the 2019 competition, that would put them at a total of 10 indoor and outdoor national titles since 2010. They already hold the most titles since 2010 in Division 1 with nine.

Grant Holloway will help lead the way for the men. He is a two-time defending 110-meter hurdles champion and will be attempting to become the first collegiate athlete to sweep the indoor and outdoor high hurdles NCAA titles three years in a row. Holloway also holds five of the eight fastest 110-meter hurdles times in collegiate history.  He also holds five of the six fastest, and 10 of the 17 fastest 60 hurdles times in collegiate history.

Florida’s women’s team have just missed the podium the past two years, earning 5th place at the NCAA Outdoors. Last year’s fifth-place finish marked the first time since 2003-04 the Gators had consecutive top-five finishes. The Gators finished four points out of fourth place last year and only one point out of fourth place in 2017.

Yanis David and Sharrika Barnett will lead the way for the women’s side. Senior David captured her first career national title with her 20-centimeter victory in the triple jump at March’s NCAA Indoor Championships.

She enters this week as the No. 2 triple jumper in collegiate history and is tied for fifth nationally in the long jump. David also got her first (second, third, and fourth) SEC titles this year, as she became the second woman in history to sweep the horizontal jumps titles at both SEC Indoors and Outdoors.

Senior Barnett won last year’s SEC Outdoors 400 meters title. This title also broke Florida’s 13-year school record. She finished fourth last year and fifth in 2017 in the outdoor 400-meter race. She will be eyeing the title this year, which would make her only the second female to hold this title in school history.