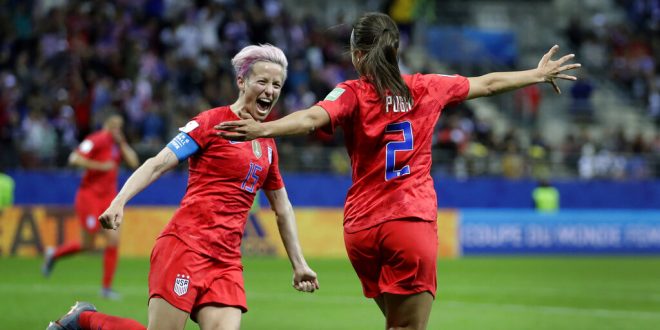 Historic World Cup Performance by the US Women’s National Team

In search of their second consecutive World Cup trophy, the US Women’s National Team did not hold back yesterday. The Stars and Stripes routed Thailand in the largest victory ever in World Cup history. The game surpassed Germany’s 11-0 win over Argentina back in 2007.

In a tournament that uses scoring margin and total goals as a tiebreaker, goals are critical. The US knows this and came ready to attack.

Alex Morgan opened up the scoring for the US and it was not short lived. Rose Lavelle and Lindsey Horan then shot goals of their own. The US began to dominate early, heading into halftime with a 3-0 lead.

The US showed no mercy in the second half. They added a total of 10 goals to their lead by consistently applying pressure and enabling them to control the game. The US took a total of 39 shots and completed 547 passes compared to Thailand’s 2 shots and 128 passes. They possessed the ball for roughly 75% of the game. It was a rout.

During the second half, Samantha Mewis struck first for the US. She ended up scoring two goals in her World Cup debut. Adding on to the US’s lead Rose Lavelle, Megan Rapinoe, Mallory Pugh, Carli Lloyd, and Alex Morgan all scored goals that contributed to a 13-0 blowout win.

Morgan was named the Player of the Game after her record 5 goals and 3 assists. Prior to yesterday’s matchup, Morgan hadn’t scored in her last 302 minutes of play. It’s safe to say Morgan escaped her slump yesterday. Her 5th goal tied Michelle Aker’s single-game FIFA Women’s World Cup record.

The US has set their standards quite high, yet they’re focused on what’s to come.

Here’s what Rose Lavelle had to say post-game: World Cup-Looking to Next Game

After a few days off, the US will face Chile at Noon ET, and Thailand will face Sweden at 9 a.m. ET on Sunday.

Maddie Schmidt's goal is to become a college football reporter. Be sure to check out her sports blog, mygamedaygal.com.
@@maddieschmidt15
Previous FIFAWWC Group A Match-week 2: France vs. Norway & Nigeria vs. South Korea
Next Jag’s Jalen Ramsey says he won’t get contract extension