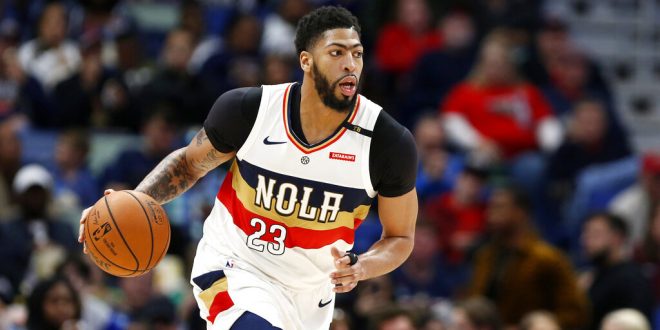 FILE - In this March 16, 2019, file photo, New Orleans Pelicans forward Anthony Davis brings the ball up during the first half of the team's NBA basketball game against the Phoenix Suns in New Orleans. Two people familiar with the situation say the Pelicans have agreed to trade Davis to the Los Angeles Lakers for point guard Lonzo Ball, forward Brandon Ingram, shooting guard Josh Hart and three first-round draft choices. The people spoke to The Associated Press on condition of anonymity because the trade cannot become official until the new league year begins July 6. ESPN first reported the trade.(AP Photo/Tyler Kaufman, File)

The New Orleans Pelicans traded their all-star center/forward Anthony Davis after seven seasons to the Los Angeles Lakers. The trade involved the exchange of Lonzo Ball, Brandon Ingram, Josh Hart, three first-round picks and the overall No. 4 pick of the 2019 NBA Draft.

ESPN’s Adrian Wojnarowski was the first to report the breaking news of the trade.

Davis has made it obvious to the Pelicans management since January of this year that he is looking to play for another team. The deal will not be finalized until July 6. However, if the Lakers wait until July 30 to settle the deal, the franchise could clear enough cap space to potentially sign a max-level free agent for the upcoming season via Wojnarowski.

The Lakers will have $32.5 million in cap space come this offseason. This leaves the slot open for one of these max-players to potentially join Lebron and Davis:

What Does This Mean for the Pelicans?

The Pelicans look to enter a new era and rebuild the team with trading Davis.

This is the first time since Cleveland in 2011 that a team has secured two of the top four picks of the draft.

The Pelicans now not only have the fourth overall pick, but the team also has the number one pick this year as well. New Orleans is expected to pick phenom Zion Williamson, who averaged 22.6 points, 8.9 rebounds, 2.1 steals, and 1.8 blocks in his only season with the Duke Blue Devils, according to ESPN.com.

If Zion is selected by the Pelicans, he will join the team with two of the Lakers’ previous number two draft picks, Ball and Ingram.

What does this mean for the Lakers?

Now for the Lakers, their benefit from the trade is simple. Lebron James is paired with Davis.

Anthony Davis does a lot of damage at the rim on both ends but he also shot 38% last season on spot-up threes. That's going to be important playing alongside LeBron James. pic.twitter.com/UINQtQJWzR

Not only is Davis a fearsome opponent inside the paint, but the man can shoot lights out from beyond the arc. With Lebron’s playing style of always attacking the rim with a ferocious tenacity, he tends to kick the ball out to his spot-up shooters as much as possible.

Hence, if Davis can be fearsome inside the paint and also be a stretch-five issue for other teams, then Lebron will finally have the crucial teammate he’s been missing from the Lakers organization.

The only issue the Lakers currently have is that they lost most of their entire young core. The only acceptable player that performed well last season that the Lakers kept is Kyle Kuzma. However, besides him, if you look at their roster, you’ll most likely think to yourself, “Who are these people?”

Players like Isaac Bonga, Jemerrio Jones and Jonathan Williams all averaged below seven points last year, with Bonga averaging less than a point in 24 games played.

To conclude, the Lakers need other veterans to join the team. Most of their veterans like Lance Stephenson, JaVale McGee, Rajon Rondo, Kentavious Caldwell-Pope, Mike Muscala, Reggie Bullock and Tyson Chandler all are Free Agents this offseason. That means that there are officially only six players on the roster today. In other words, they need to sign players ASAP.

Reactions to the Trade

There have been many reactions from all over the NBA social media world on the trade between the Pelicans and the Lakers.

However, Kentucky men’s basketball head coach John Calipari weighed in and said that the trade is a good deal for both teams.

The 2019 NBA Draft will premiere on Thursday, June 20. The next notable big event will be the NBA Summer League that starts on July 1 and ends on July 15.

What does Scooby-Doo, a wooden chair and Bruce Jenner all have in common? Their names …