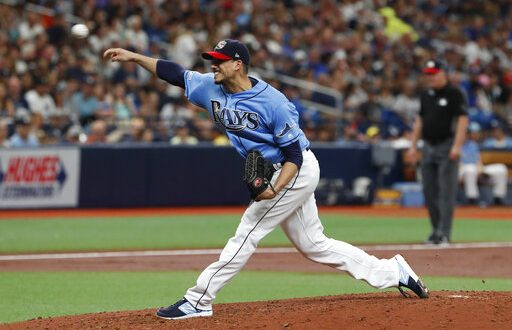 Tampa Bay Rays Looking to Shine Again in Second Half

No team was brighter than the Tampa Bay Rays to start the season. They were one of the best stories in baseball. In the second week of May, they boasted the league’s best record, 23-12. Then, the Rays suffered a skid. During this skid, the New York Yankees would surpass the Rays for the lead in the American League East division. Now, the Rays head into the second half of the season 6.5 games behind the surging Yankees. However, they have a half-game lead on the Cleveland Indians for the top wild card spot. The Rays hope a strong second half can propel them into the playoffs for the first time since 2013.

The one constant this year for the Rays has been the performance of their starting pitching. More specifically, the dominance of pitcher Charlie Morton. Signed during the offseason from the Houston Astros, Morton has clearly been the most valuable player on this club. Morton is third in the American League in wins (10). He also holds the lowest ERAs in the AL with 2.32 as well as one of the highest strikeout totals with 142. Morton showcased his first half dominance by slowing down the New York Yankee offense, one of the most dangerous lineups in baseball, in Sunday’s first half finale. The Rays ace struck out 10 batters, only giving up five hits and one earned run.

If Morton can carry over the dominance into the second half, the Rays could be unbeatable when he takes the mound.

The Rays offense is in the middle of the pack in the AL in many of the main statistical categories. They are ranked seventh in on-base percentage (.326), ninth in slugging percentage (.423) and ninth in RBI (394). However, the Rays hitters weren’t swinging for the fences in the first half. Tampa Bay ranks 11th in the AL with 112 home runs. This is the lowest home run total out of the other AL playoff contenders.

Leading the Rays hitters has been second baseman Brandon Lowe. Lowe leads the team with 16 home runs and 49 RBI. His strong first half performance led to Lowe being one of the team’s three representatives in Tuesday’s All-Star Game.

The second half schedule for the Rays is a classic good news, bad news scenario. Good news for the Rays is 24 of their last 71 games are against the Baltimore Orioles and Toronto Blue Jays, two of the worst teams in the league. The bad news is the Rays don’t have many opportunities in the second half to close the 6.5 gap between them and the division leading Yankees. They only have six more games against New York, with four of them taking place in The Bronx. The Rays also have two west coast road trips, which aren’t easy for any team. One of those trips includes a two-game series with the National League leading Los Angeles Dodgers.

The road ahead for the Rays may have some twists and turns along the way. However, they do have some chances to win the pennant. The best bet for the Rays moving forward is to preserve the top wild-card spot.

Back from the Break

Tampa Bay kicks off the second half against the division rival Orioles. They’ll start a four game weekend set, which includes a doubleheader on Sunday, in Baltimore on Friday.