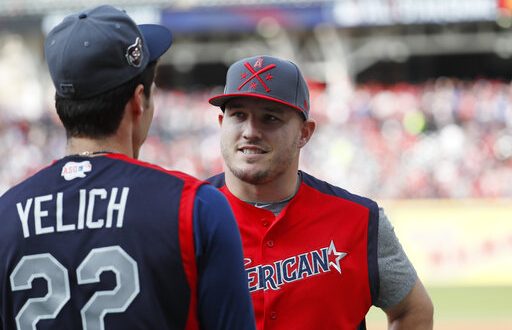 Mike Trout, of the Los Angeles Angels, talks with Christian Yelich, of the Milwaukee Brewers, during batting practice for the MLB All-Star game, Monday, July 8, 2019, in Cleveland. The game will be played Tuesday. (AP Photo/John Minchillo)

The National League will look to rock the “Rock and Roll Capital of the World” by winning the 2019 MLB All-Star Game in Cleveland, Ohio and put an end to the American League’s six-year All-Star Game winning streak.

Neither team made changes to their starting lineups. All replacements consist of reserve players and pitchers due to injuries and rest according to the MLB.

For the National League, Dodgers first baseman Max Muncy replaced the Nationals third-baseman Anthony Rendon due to injury and rest. Pirates pitcher Felipe Vazquez was added to the pitcher’s list as Diamondbacks pitcher Zack Greinke is dealing with personal matters. Additionally, Milwaukee’s Brandon Woodruff who has a back injury was replaced by his teammate, closer Josh Hader. Similarly, Nationals pitcher Max Scherzer is out with a back injury and pitcher Sonny Gray from the Reds will replace him.

Baseball fans will hope the offense from last year’s All-Star Game will carry into its 90th edition at Progressive Field on Tuesday night. In 2018, five different players from each team connected a home run with the game ending 8-6 in favor to the American League.

Los Angeles Dodgers pitcher Hyun-Jin Ryu, who is from South Korea, will take over the mound tonight for the National League. Ryu has won 10 games and lost two in his 17 starts this season. His impressive 1.73 ERA is one of the reasons why he will be starting.

The American League will counter with 36-year-old and eight-time All-Star Justin Verlander as its starter on the mound. Verlander has 10 wins and four losses in his 19 starts for the Houston Astros in the 2019 season. He has a 2.98 so far in the season.

Six out of the 10 sluggers from the 2018 MLB All-Star game will feature in Tuesday’s game.

Cubs catcher Willson Contreras and Brewers outfielder Christian Yelich are two starters who hit home runs a year ago. Rockies shortstop Trevor Story is another one of the players who hit the ball deep last in 2018 and like last year he will remain in the reserves.

If the game goes into extra innings, the 10th inning and so forth will begin with a runner on second base each time, in order to help with scoring. Another change came as a part of the Collective Bargaining Agreement negotiated before the 2017 season, which stopped home-field advantage in the World Series for the team that won the All-Star Game.

Figuring out a plan to make it big in the soccer scene in the U.S. or anywhere else in the world. For now, I'm having a blast writing for ESPN Gainesville and learning a lot from managers and students around the workplace. I'm covering the TV beat for Gators Soccer. What a team! Follow me on twitter: @J_AguerrevereUF
@@J_AguerrevereUF
Previous Alonso Plays to Survive, Wins 2019 Derby Title
Next Tampa Bay Rays Looking to Shine Again in Second Half