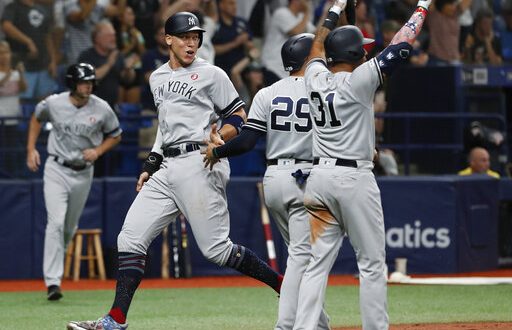 An American League club has won the World Series four out of the past six seasons. History may repeat itself again this year. The top of the AL is stacked with teams ready to win right now. As we approach the second half of the season, the race for the pennant will be one to watch on a nightly basis.

Here's how the @MLB playoffs would look today … pic.twitter.com/8dZrcFs0oj

Going into the second half, the New York Yankees hold the best record in the AL at 57-31. The Yankees finished the first half of the season virtually invincible. New York went 16-4 in their last 20 games before the break. The catalyst for New York’s success has been their offense. This year’s Yankee club has truly lived up to the nickname “The Bronx Bombers.” New York homered at least once in 31 straight games. This broke the previous record of 27 straight games held by the 2002 Texas Rangers. Leading the way for New York has been first baseman DJ LeMahieu, catcher Gary Sanchez and outfielder Aaron Judge.

The Yankees’ success have led to large lead in the AL East. They have a 6.5 game lead over the Tampa Bay Rays. New York has six more meetings with the Rays. Four of these meetings will come in The Bronx.

Despite all the injuries to start the season, the Yankees haven’t missed a beat. New York will be buyers at the trade deadline as they look to add a starting pitcher. If they get an ace pitcher, the Yankees might be in prime position to claim their 28th championship.

Houston, We Don’t Have a Problem

One of the teams standing in New York’s way are the Houston Astros. Two years removed from their first championship, the Astros remain one of the league’s top teams. The Astros trail the Yankees by only one game in the standings.

Houston holds a comfortable lead in the AL West. They lead the second place Oakland Athletics by 7.5 games. The Astros will see the A’s 11 more times during the second half. Only four of those remaining meetings will in Oakland.

Where the Yankees dominate opponents on offense, the Astros do so on the mound. Houston holds the second lowest ERA in the AL (3.86). Their staff is led by multiple time Cy Young Award winner Justin Verlander.

Similarly to the Yankees, the Astros had to overcome key players being in and out of the lineup. Now mostly healthy, the Astros lineup is ready to take off. The triple threat of second baseman Jose Altuve, outfielder George Springer and infielder Alex Bregman can lead the Astros to a second title in three years.

The Minnesota Twins have been one of the more surprising stories this season. Seemingly out of nowhere, the Twins have propelled themselves to the forefront of the pennant conversation. While most of the talk has been about the Yankees offensive fire power, it’s actually the Twins who lead baseball in much of the top statistical categories. Minnesota is tied with Boston for the MLB lead in most runs scored with 509. They lead all of Major League Baseball in home runs, knocking 166 balls out of the park. The Twins are second in the majors in hits with 861.

They have left their competition in the AL Central in the dust. The Twins have a comfortable 5.5 game lead over the Cleveland Indians for the division lead.

The Twins might continue to surprise people in the second half by being in good position to win the pennant.

With all three division leaders holding strong leads, many teams are now focusing in on the wild card race. The Tampa Bay Rays currently hold a razor thin lead for the top wild card spot. The Cleveland Indians trail the Rays by half a game. The two meet for a three game series at Tropicana Field from Aug. 30-Sept.1. This is the only meeting left between these two. If the standings remain as they are, this could be a crucial series.

Also in the mix for the two wild card spots are the Oakland Athletics, Texas Rangers and Boston Red Sox. The A’s trail the Indians by 1.5 games. The Rangers are two games back of the second spot. The defending champion Red Sox are three games behind the Indians.

It doesn’t matter how you get into the playoffs. It’s a whole new season when the pennant is on the line.

The American League is loaded with contenders for the pennant and a World Series title. This will make the AL much see TV during the second half.