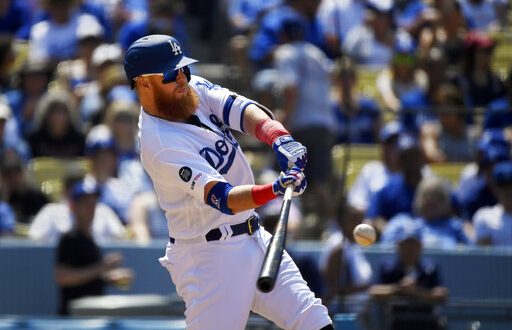 Dodgers Lead the Charge in the National League Pennant Race

The Midsummer Classic is over and it’s time for teams to resume play for the second half. The National League has a few close races in each division and there’s a lot of games left for a shift to occur.  There are some teams in the NL that look like the clear cut favorites to win the division. Barring any major injuries, their respective leads can hold out.

The Atlanta Braves currently sit on top of the East and have a six-game lead over the next team, the Washington Nationals. Many believed the Nationals would have a major drop off since Bryce Harper signed with the Philadelphia Phillies in the offseason. The Phillies are still in striking distance and are only half a game behind the Nationals. The Braves have a core of young talent that consists of Ronald Acuna, Ozzie Albies and Dansby Swanson.

The consistent presence of veterans like Freddie Freeman, Josh Donaldson, and Brian McCann gives this Braves lineup balanced firepower. The recent signing of former Cy Young Award winner Dallas Keuchel gave Atlanta a frontline starter with World Series experience to get them over the hump.

The NL Central has the closest race from top to bottom between the five teams. They are only separated by 4.5 games. The Chicago Cubs are the division leaders to start the second half but the Brewers, Cardinals, and Pirates are knocking at their door. This Cubs team still has a lot of the players from their 2016 championship team, but consecutive playoff runs can take a toll.

The Cubs were able to sign lights out closer Craig Kimbrel to address their bullpen problem. There is no denying that the Cubs have the star power on their team to come out of the Central. The way the standings are now it is only a matter of time when the Cubs separate from the rest of the pack. They are built to make a postseason run that is led by their All-Stars Javy Baez, Kris Bryant, and Wilson Contreras.

The Los Angeles Dodgers have a landslide of a lead in the West and have the best record in baseball. Losing back-to-back World Series can crush a franchise. The Dodgers, on the other hand, still believe they have a window to win it all and they are showing everyone why they are still the favorites to represent the National League in the World Series.

With a record of 60-32, the next team in the division sits 13.5 games behind the Dodgers. It is their largest lead in the division entering the All-Star break since 1994. The Dodgers will kick-off the second half of the season against the Boston Red Sox. This will be a rematch of the 2018 World Series. It’ll showcase how the Dodgers perform against a championship level opponent. The Dodgers are a handful for any opponent with five All-Stars this season and arguably one of the best pitchers in the game today, Hyun-Jin Ryu.

Pitching Probables for the Dodgers and Red Sox series.

The wild card race in the National League is extremely competitive to start the second half. Washington and Philadelphia hold the two spots at the moment. However, no lead is safe when they have six teams behind them only separated by 2.5 games. The Milwaukee Brewers had a deep postseason run last season. They are built for a solid second-half stretch to take a wild card spot and aren’t far behind the Cubs in the NL Central.

Other notable teams in the hunt are the Arizona Diamondbacks and the San Diego Padres. Those two teams have been under the radar due to the other teams in their division. The Padres, with Manny Machado and the rest of the young squad, would have a better chance to fight for a wild card spot rather than trying to dethrone the Dodgers in the NL West.