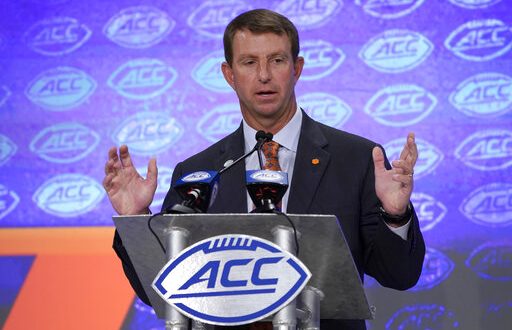 With nearly every preseason poll putting Clemson at No. 1, Dabo Swinney and his Tigers will get back to work in hopes of winning back-to-back championships. At ACC Media Days, he spoke about his team’s chance of repeating.

The Tigers enter the season with arguably the nation’s best quarterback in Trevor Lawrence and running back Travis Etienne. This offense could be problematic for opposing defenses all season long. Lawrence enters the season as the favorite to win the Heisman; which should come as no surprise after his performance in the College Football Playoff last season.

Clemson receiving corps is also amongst the best in the country. Headlining the group is Justyn Ross. He is known to cause headaches for defensive backs with his strong hands and fantastic route running abilities.

Watch lists for the Doak Walker and Biletnikoff Awards are out, and rumor is 5️⃣, 8️⃣ and 9️⃣might be worth watching in 2019.

Tee and Justyn for Biletnikoff: https://t.co/uUC8rfk3Iw

Recent reports have seen Alabama and its players and coaches making excuses for their 44-16 loss in the National Championship last season. Reports like these boast well for a Clemson team trying to keep their dominant edge over the college football world.

It’s obvious this Clemson team is expected to get back to the College Football Playoff yet again and compete for a national championship, but just how dominant can they be? Dabo Swinney has built a program that almost makes your jaw drop when you see the talent this roster has now and who it has coming in over the next few years.

The Tigers should almost cake walk to the ACC Championship, barring any major injuries, with very little ranked opponents on their schedule. Clemson could shatter records in all three facets of the game. With just over a month until the start of college football, all eyes will be on the defending champions.