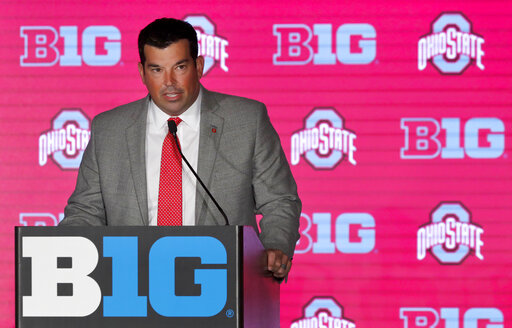 There’s a new leader for the Ohio State football program. New head coach Ryan Day replaces Urban Meyer, who retired at the end of last season after seven seasons as head coach. Despite the change in leadership, the Buckeyes remain one of the most talented teams in college football. At Big Ten Media Days, Day expressed his readiness to maintain the level of success Buckeye fans have been accustomed to recently.

When you turn on Ohio State football this season, not seeing Urban Meyer pacing up and down the sidelines might be an odd sight. However, seeing Ryan Day in the role is something we have seen before. During Meyer’s three game suspension at the start of the 2018 season, Day served as the interim head coach. The Buckeyes went 3-0 during the suspension. They didn’t miss a beat during those three games. Part of the reason for the success under Day is the similarities in coaching philosophy between him and Meyer.

Day said that’s part of the reason the transition has gone so smoothly.

Even though Meyer isn’t coaching any more, his impact is still felt throughout the program, according to Day.

Heading into the 2019 season, the Buckeyes remain one of the favorites in the Big Ten and a title contender. On offense, Ohio State picked up transfer quarterback Justin Fields from Georgia. Fields, a former five star recruit, was one of the most sought after talents coming out of high school. The Buckeyes return J.K. Dobbins, who rushed for over 1,000 yards last year and scored 10 touchdowns. Coupled with depth at the receiver positions, the offense is loaded with talent. The only question is some turnover on the offensive line.

On defense, the talented unit looks to shape up it’s run defense, which allowed 4.5 yards per game a year ago. This might be tough to do without standouts such as Nick Bosa. The secondary appears to be the strength of the Buckeye defense. This group is led by junior cornerback Jeffrey Okudah.

Despite the coaching change, the Buckeyes only lost two guys to the transfer portal. Ryan Day says this is attributed to the guys buying into the new leadership of the program.

The Buckeyes open the 2019 season at home against Florida Atlantic Aug. 31.