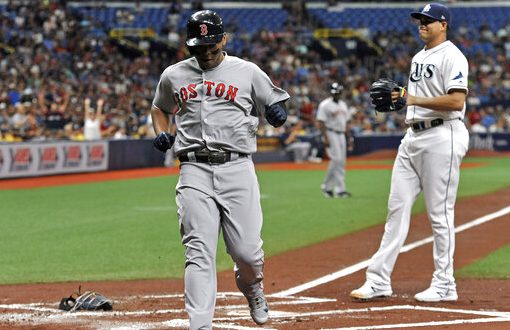 The Tampa Bay Rays and Miami Marlins have been eerily similar as of late. Both teams have been struggling, with the Rays’ struggles being more prominent. The Rays’ losing skid has them sliding down the postseason standings as their playoff chances look more and more like dreams. On the other hand, the Marlins’ rollercoaster season continues with the team showing signs of improvement. However, displays of inadequate baseball soon follow.

On Tuesday, one team couldn’t end their losing skid. The other team was able to end their skid while flirting with perfection.

For over a week, the Rays can’t get a break. Following what many believed to be the win of the year against the Yankees on July 16, the Rays have dropped seven of their last eight. This skid has caused the Rays to fall down the American League East standings and in the wild card race. On Tuesday night, the Rays lost prime positioning in both races. They fell to the division rival Boston Red Sox 5-4, dropping them to third in the AL East.

The Red Sox struck first thanks to a wild pitch from Rays starting pitcher Yonny Chirinos. This brought home third baseman Rafael Devers and gave Boston a 1-0 lead. Later in the inning, left fielder Andrew Benintendi gave the Red Sox a 2-0 lead with an RBI single.

The Rays would rally in the third inning with a two-run home run from catcher Travis d’Arnaud. This shot tied the game up at two.

However, the Rays wouldn’t go quietly. An RBI single from pinch hitter Ji Man Choi to center made it 5-3. Then, with the bases loaded, left fielder Tommy Pham drew a walk to drive in a run. This made it a 5-4 game. The Rays couldn’t complete the comeback.

The win by Boston propels them to second place for the first time since March. Manager Alex Cora said you can’t blame the pitching for the game getting close toward the end.

.@RaysBaseball manager Kevin Cash recaps the start of Yonny Chirinos, standout performances by Travis d'Arnaud and playing to win from the beginning of the game. #RaysUp #MLB pic.twitter.com/y0WNE57lH5

While the Rays were unsuccessful to end their struggles, the Miami Marlins were able to snap a four game losing skid in almost perfect fashion. Marlins starting pitcher Caleb Smith almost repeated history. On the 10 year anniversary of Mark Buehrle’s perfect game for the White Sox, Smith pitched for five and two-thirds perfect innings to lead the Marlins to a much needed 5-1 win over the Chicago White Sox.

Smith retired the first 17 White Sox batters he faced. He even struck out five straight batters spanning the fifth and sixth innings. His perfect game bid was snapped when he walked center fielder Adam Engel with two outs on a 3-1 count in the sixth. Smith finished the outing with seven innings pitched, striking out nine and only allowing two hits. This was just Smith’s fourth start after missing a month with inflammation in his left hip.

Smith had enough run support to help him out. The Marlins exploded with four runs in the fourth inning, capped off with a two-run home run from left fielder Curtis Granderson.

Right fielder Harold Ramirez would make it a 5-0 Marlins lead with a solo shot to right in the fifth inning.

The Rays will try to salvage the series and avoid the sweep when they host the Boston Red Sox again on Wednesday. For the Marlins, they’ll go for the series win against the White Sox Wednesday night in Chicago.