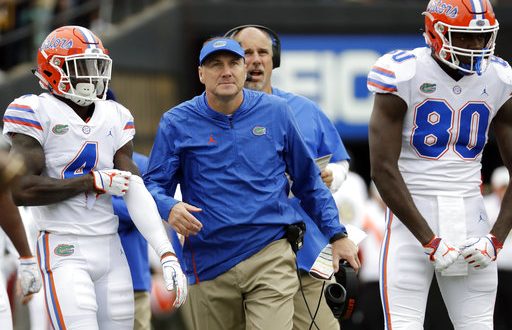 Florida head coach Dan Mullen, center, watches from the sideline in the first half of an NCAA college football game against Vanderbilt Saturday, Oct. 13, 2018, in Nashville, Tenn. (AP Photo/Mark Humphrey)

It’s a Florida Gator football tradition spanning close to a decade. Friday Night Lights, one of Florida’s premier recruiting events, takes place Friday night at Ben Hill Griffin Stadium. This event was created by former head coach Urban Meyer. Since then, it has been a fixture of the program’s recruiting efforts. This weekend, the Gators host some of the nation’s top high school players. The goal is to sell them on coming to Gainesville to play college football. The 2019 edition of Friday Night Lights is unique. It’s the first time Friday Night Lights takes place the same day as the opening of fall camp. Florida hopes to use this weekend as a chance to solidify their 2020 class.

Many of the attendees at Friday Night Lights come from Florida’s upcoming 2020 class. One of the top targets for the Gators is 4-star running back Keyvone Lee from Clearwater. In addition to the Gators, other teams recruiting Lee are Penn State, LSU, Florida State and Alabama.

Florida Gators recruiting analyst for Swamp247 Blake Alderman joined Sportscene with Steve Russell to discuss the attendees for Friday Night Lights. Alderman said Lee is a top target for the Gators this weekend.

Another notable 4-star running back coming to campus this weekend is Michael Drennen from Ohio. This weekend will be Drennen’s first visit to Gainesville. He has Florida in his top 10 schools.

On the offensive line, the Gators welcome 4-star recruit Marcus Dumervil to campus this weekend. Dumervil is a standout offensive tackle from St. Thomas Aquinas in Fort Lauderdale. Other schools going after Dumervil include LSU and Oklahoma.

Alderman said Dumervil’s presence this weekend is huge for this staff as they continue to work on the offensive line.

This weekend also helps the Gators secure some commitments for their 2021 class. Notable attendees from the 2021 class include quarterback Carlos Del Rio. Del Rio is a 3-star pro style quarterback from California. Other schools targeting Del Rio are Arkansas and Florida State.

Talented teammates from Miami Palmetto High School will be on campus this weekend. Defensive back Corey Collier is the third ranked corner in the 2021 class, according to 247 Sports. Florida is battling with in-state rivals Florida State and Miami for Collier. Another star from Miami Palmetto, defensive end Dylan Brooks, will be in Gainesville this weekend. Brooks is ranked as the top weak side defensive end in the class. Brooks will join Collier this weekend in Gainesville.