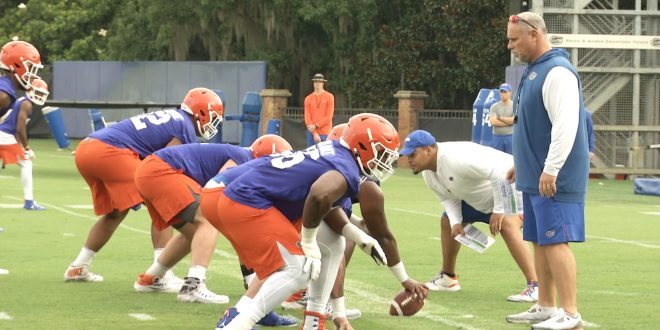 Hevesy talks about the offensive line at Florida’s Media Day

With inexperience up front, co-offensive coordinator and offensive line coach John Hevesy talks about his unit at Florida’s Media Day.

The Gators will deploy four new starters on their offensive line from a year ago. Senior center Nick Buchanan is the only returning starter and will look to be a leader among the inexperienced group.

The #Gators return only one starter on the offensive line: Nick Buchanan.
Buchanan has stepped into a leadership role to get the offensive line ready for the 2019 season. @ESPNGainesville pic.twitter.com/Lv74BNCy05

Hevesy will welcome the challenge of coaching this new starting group. They know the playbook and personnel, but it’s all about getting results when it matters.

The Gators will look to get their running game early on and have a dynamic trio of Lamical Perine, Dameon Pierce and Malik Davis coming out of the backfield. In order to get the ground game going, it’ll start with the play of the offensive line.

Another key point of emphasis Hevesy made was playing as a unit. The offensive line will not excel if the group is not cohesive which starts with Buchanan at the center position.

With five true freshman on the roster, there’s a lot of room to grow individually and as a unit. In addition to Buchanan, Hevesy said he’s leaned on the likes of Stone Forsythe and Brett Heggie to teach the younger players.

The Gators come into the season with loads of talent on both sides of the ball. The biggest question mark is this offensive line, which has talent but is inexperienced. With their first game less than a month away, the offensive line still has some work to do in order to get things rolling. 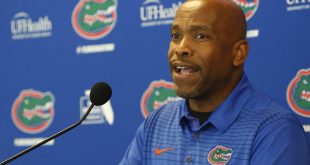