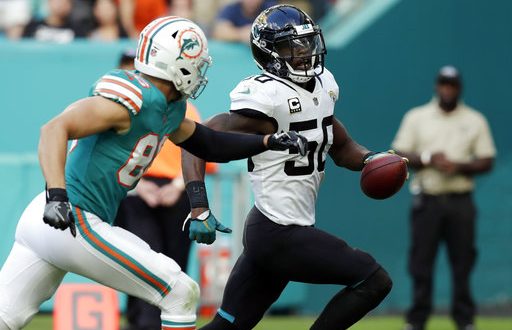 The NFL Preseason games start Thursday night and two Florida teams will be a part of these opening games. Both the Jacksonville Jaguars and the Miami Dolphins will play Thursday night at 7:30 p.m. The Jaguars will be traveling to Maryland to face the Baltimore Ravens while the Dolphins host the Atlanta Falcons.

The Eagles drafted Foles back in 2012 and he later played for the St.Louis Rams and the Kansas City Chiefs before returning to the Eagles in 2017. Foles stepped up as the starting quarterback for the Eagles after Carson Wentz was lost for the season due to an injury. He led the Eagles to their first Super Bowl victory in 2019 after defeating the New England Patriots and received the title of the game’s MVP.

Jaguars head coach Doug Marrone says that Nick Foles’ experience will hep bring that depth that everyone is expecting from them.

When asked about his adaptation to the new team, Foles said that he welcomes these new methods with open arms.

Former Gators offensive linemen Jawaan Taylor makes his NFL debut in this game. He was drafted in the second round and was the 35th pick overall.

Taylor joined the Gators in 2016 in which he played in all 13 games and started in 12. He was the only Gator freshman to play in the offensive line. He was selected to the Freshman All-SEC Team.

In his last season with the Gators, he only allowed 18 sacks throughout the whole season, which ranked 20th in the country.

The Dolphins are still in the middle of choosing an official starting quarterback. The two top competitors are Ryan Fitzpatrick and Josh Rosen.

The last update that was given by head coach Brian Flores was that for now, their guy is Fitzpatrick. However, the spot is still open and they will have to compete for it.

The St. Louis Rams drafted Fitzpatrick back in 2005 in round number seven. He has played for various NFL teams including the Cincinnati Bengals, the New York Jets, and now the Miami Dolphins. He has 15 years of experience, which gives him a little advantage over Rosen who is only entering his second year in the NFL.

Camila is a senior at the University of Florida, who served as a beat writer for the women's basketball team from 2019 until the 2021 season. She was also a beat writer for the Gators football team during the 2020 season. Camila is also WUFT's news director as well as a sports reporter/anchor.
@CamilaMaffuz
Previous Florida Looks to Adjust with Lack of Defensive Back Depth
Next Jaguars, Dolphins Experience Two Different Preseason Opener Results