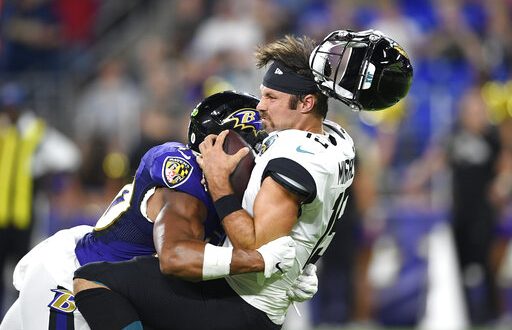 It’s the tale of two differing preseason openers for the Jacksonville Jaguars and the Miami Dolphins. For the Jaguars, the much-anticipated debut of new quarterback Nick Foles was put on hold as the Jaguars struggled. For the Dolphins, their quarterback competition took center stage in their preseason opener and Miami came out with a win, showing signs of hope.

Jacksonville was shut out by the Baltimore Ravens 29-0. The Ravens dominated the Jaguars on both sides of the ball Thursday night. Out of the first three offensive possessions for the Ravens, quarterback Lamar Jackson led the team to two scoring drives. The first ending with a 52-yard field goal from kicker Justin Tucker. The second drive concluded with a Jackson 10-yard touchdown pass to receiver Will Snead. Before the first quarter ended, the Ravens already held a double-digit lead.

Thursday night’s performance by the Jaguars shows there is still work to be done to revamp this offense. They only accounted for 112 yards of offense compared to Baltimore’s 288. The Jaguars registered for just eight first downs. However, alarge reason for the offense’s inabilities in the preseason opener was the absence of starting quarterback Nick Foles. He was one of 31 players on both sides sitting out the preseason opener. Other notables sidelined were defensive back Jalen Ramsey, running back Leonard Fournette and defensive end Calais Campbell.

Ravens head coach John Harbaugh, who played his starting quarterback Thursday night, says there was no need for Foles to be out there.

The battle rages on down on South Beach for who will be the Dolphins’ starting quarterback. Veteran quarterback Ryan Fitzpatrick got the start in the preseason opening 34-27 win over the Atlanta Falcons. On his opening drive, Fitzpatrick led the team down the field, setting up a 48-yard field goal by Jason Sanders. On Fitzpatrick’s second drive under center, the Dolphins went three and out. In his Dolphins preseason debut, Fitzpatrick went 2/5 for 20 yards, with both completions coming on the opening drive.

Second-year quarterback Josh Rosen took most of the snaps on Thursday night. Rosen had a mixed performance with some flashes of potential with some moments that shake your head. One of those frustrating moments was Rosen’s interception late in the second quarter. Rosen was trying to connect with receiver Isaiah Ford, who was running a short hook route down the middle. However, the pass was easily intercepted by linebacker Jermaine Grace, who stepped in front of the pass.

Despite the one interception, Rosen had some impressive moments. One of these moments came with about a minute left in the second quarter. He connected with receiver Preston Williams, who made an insane one handed catch and stayed in bounds, for a 36 yard gain. Williams turned heads Thursday night with not just one, but two highlight worthy catches.

Rosen finished the night completing 13 of his 20 passes and throwing for 191 yards. Following his preseason debut with the Dolphins, Rosen explains how comfortable he is now with the offense.

After the other two Florida teams opened their preseasons Thursday night, the Tampa Bay Buccaneers kick things off Friday night. They have their preseason opener on the road against the Pittsburgh Steelers. This will be the first preseason game of the Bruce Arians era for the Buccaneers. All the talk around the team in training camp is the make-or-break year for quarterback Jameis Winston. However, Arians said the preseason is all about helping the young players.