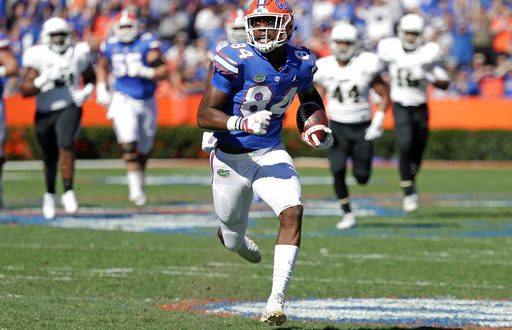 Florida tight end Kyle Pitts, center, runs for a touchdown on a 52-yard pass play past the Idaho defense during the first half of an NCAA college football game, Saturday, Nov. 17, 2018, in Gainesville, Fla. (AP Photo/John Raoux)

The tight end position hasn’t necessarily been a strength for the Gators in the past few years, but the 2019 group is looking to change that.

Time to Take The Leap

This years tight ends corps is lead by Kyle Pitts, Lucas Krull and Kemore Gamble. Pitts is expected to take a big leap this season after only catching three passes for 73 yards and a touchdown in 2018. Measuring at 6-foot-6-inches, Pitts has the height and athleticism to be a major weapon in Dan Mullen’s offense. The sophomore worked out with the wide receivers in the spring which speaks volumes for his talent.

In his first season back after taking two years off from football, Krull was effective when he saw the field. However, Krull will be looking to catch touchdowns in 2019 instead of throwing for them. The redshirt junior made one of the memorable plays of the season against LSU when he threw a 15 yard pass to Feleipe Franks in the red zone that led to a go-ahead score.

Jack of All Trades

What could potentially make the Gators tight end unit so special is the fact that they are very dynamic. The trio of Pitts, Krull, and Gamble are capable of doing whatever Mullen needs them to do. Whether it be route running, catching, or blocking, the group gives the offense more flexibility.

Lucas Krull expanded on that sentiment.

If the Gators tight end unit does indeed become one of the best in the nation like Krull expects, it would break the trend of shallow tight end play. Florida hasn’t had their tight end group catch five or more touchdowns in a season since 2015.

Florida was ranked 22nd in the nation in points per game at 35. Insert improved tight end play and who knows how much better the Gator offense can be.